Looking for something fresh to share with students this 7 March? Check out our recommendations of the best recent novels for early years, primary and secondary...

This beautifully illustrated picture book is a tale of an unlikely friendship between a mouse and a bear, and feline villain waiting to snatch the beguiled and unwary…

While the story won’t alarm young children, there’s plenty of potential here for sensitively exploring what real friendship looks like, and why caution is required when faced with strangers bearing gifts.

2 | Luna and the Moon Rabbit

Winner of the inaugural Stratford-Salariya Picture Book Prize, this is a magical tale inspired by Asian folklore and the wonderful animated films of Studio Ghibli.

Its illustrations have a soft, dreamlike quality that will enchant children and adults alike, while the story – of a young girl and her nocturnal adventures with a giant rabbit who lives in the moon – will doubtless fire the imaginations of your charges.

Lemmings, on the off chance that you were unaware, are rodents with an unfortunate (and largely inaccurate) reputation for gleefully trooping to their doom, either by attempting treacherous river crossings or flinging themselves off of any cliffs that happen to lie between them and their destination.

Ame Dyckman and Zachariah Ohora have fun with the myth by suggesting that the creatures might change their ways if only they could read about their scientifically established habits.

4 | The Bad Mood and the Stick

Lemony Snicket’s story of a bad mood – rendered in the form of a glowering cloud – and its journey from person to person (and animal), is guaranteed to raise a smile, even if it might also raise an eyebrow along the way.

Your preschoolers will find much of it hilarious, and there are useful messages about grumpiness to convey along the way.

In this great picture readers are taken on a tour of the Amazon that introduces just a tiny number of its myriad inhabitants, including some familiar faces as well as those you might struggle to put a name to.

The stars of the show here are the colourful illustrations – simple, strong silhouettes, atop bold backgrounds that never fail to grab the attention. Each is complemented by a single line of text that, rather than naming the subject of the picture, describes their movement, appearance or activity.

This glorious fact-packed non-fiction book follows the lives of over 40 children from around the world and explores the differences and similarities in their daily routines.

Pupils will learn lots, including which countries get the least and most homework, what food different children think is tastiest and what kids around the world dream of at night.

This tale, which is suitable for children beyond phonic phase 6, follows breakfast foodstuff fan Stephen as he enters a ‘design-a-cereal’ competition – but when he wins, things soon start to spiral out of control.

Each page features engaging colour illustrations and the book also contains cover notes to guide parents when reading alongside their children at home, and pupils are also encouraged to continue the learning once the story is finished via activity ideas and discussion points at the back of the book.

This evocative, rhyming story tells the tale of two children who come across an abandoned house deep in the woods and begin to imagine who might have lived there.

The text is lyrical and great for reading aloud, and children will enjoy pouring over the gorgeous impressionistic images as we hunt for clues about who the previous inhabitants might have been and where they might have gone.

9 | Sonam and the Silence

In Taliban-ruled Afghanistan, little Sonam’s world is dark and silent. Then one day, our protagonist follows a magical melodious sound to a walled garden, and her world is silent no more.

The sound is music, and it lifts her up among the stars and takes her deeper than the tree roots in the earth. How can she hold on to this extraordinary feeling in a world where music is forbidden?

This book explores Nelson Mandela’s story and legacy through the eyes of his great-grandchildren, Zazi (age six) and Ziwelene (age eight), as they question their grandmother (Mandela’s daughter, Zindzi) about the man they remember as Grandad.

Published with the intention of sharing Mandela’s vision of equality and equal opportunity to a new generation, the book touches on difficult topics such as apartheid and police brutality with age-appropriate clarity through expressive and poetic illustrations.

Fionn his sister, Tara, are sent to live with their grandfather on the remote island of Arranmore for the summer, where Fionn quickly discovers that both the island and his granddad have secrets of their own and he is drawn into this strange, mystical world.

This moving and lyrical novel is beautifully written, with vivid descriptions and strikingly original metaphors that will capture young readers’ imaginations.

12 | The Wizards of Once: Twice Magic

The hotly-anticipated second book in the Wizards of Once series, Twice Magic continues the high-octane adventures of boy wizard, Xar, and girl warrior, Wish, who have been taught since birth to despise each other.

Set in an ancient, magical world, danger lurks behind every tree and it’s up to our young heroes to cast aside their differences and work together to save the day.

As the opening title in the first children’s series ever to be officially approved by the Albert Einstein Archives, it is infused with affection and admiration for the wild-haired physicist.

The story’s eponymous heroine is a feisty, fiercely intelligent 12-year-old orphan with a profound sense of compassion that defines her just as much as her genius; the series combines fast-paced adventure with an invitation for readers to consider some of the most critical problems facing our planet today.

Part of Ransom’s ‘Microwave Shakespeare’ series, this lively and accessible retelling of Macbeth is a brilliant introduction to the play for young people – including those who struggle with literacy.

Staying impressively faithful to the plot and structure of the original text, the narrative voice is fresh, modern and colloquial; yet still includes key quotations, as well as clear analysis of themes, character, and rhetorical devices.

Permanently excluded from grammar school after responding violently to repeated bullying, George Turner moves to the comprehensive where his older brothers have a reputation for unruly and disruptive behaviour.

The teachers are suspicious of him by association, and his new classmates don’t want anything to do with the kid from the ‘posh school’ – apart from Bette.

But wouldn’t she like George better if he acted more like the rappers his siblings idolise? There’s only one way to find out…

You don’t need to be familiar with Dickens’ Oliver Twist to enjoy the first YA offering from crime and thriller writer Simon Lelic, but readers who are will get an extra level of enjoyment as each new character is introduced: Ollie, Nancy, Dodge and, of course, ‘Mad Maddy’ Sykes, who cares for no one and will stop at nothing to get what she wants.

There are other parallels, too, including The Haven itself – a secret city underneath London’s dangerous streets where kids seek sanctuary and govern themselves. There are plenty of thrilling twists and turns as the plot unfolds, and it’s great fun.

The original ‘Glass Town’ was constructed and populated by the collective literary imaginations of Branwell, Charlotte, Emily and Anne Brontë when they were all still children.

In this extraordinary book, Celia Rees dips into the fantasy world created by the young siblings – drawing out scenery, characters and conflicts, then skilfully weaving them into a storyline that also explores a near-future where artificial reality is about to open up new planes of existence, and the brutally beautiful Yorkshire moors where the Brontës lived, wrote, fought and dreamed. Utterly beautiful.

Kat Waldgrave thinks that if she lives her life online she’ll be safe from the complexities and pressures of the real world. However, after becoming the target of a shadowy alt-right organisation that manipulates disenfranchised young men to turn against ‘feminists’, she is forced to give up her internet existence. And when she does that, her physical presence starts to fade, too…

Sharply observant, achingly tender, strangely magical and entirely contemporary, this is a story about what it is really like to grow up in a digital universe, and how loneliness feels when society is more connected than it has ever been.

Whilst the prizes dangled in front of twin protagonists Roxy and Kaine (Wimbledon success, and Premiership stardom respectively) would be out of reach of most youngsters, the challenges each must overcome in order to claim their reward are those that readers will recognise from their own lives and the world around them.

Tough family circumstances; peer pressure and the undeniable lure of gang culture for those who are feeling failed by the system; and of course, the difficulty of navigating those first serious romantic relationships – all these are described in a voice that is totally contemporary and never patronising.

Following the journey of Kel Crow, and her plan to escape from the deadbeat swamp where her deadbeat family scrape an illegitimate living, it’s a raw and richly descriptive piece of storytelling, full of earthy textures, visceral emotions and, at its centre, the tentative unfurling of love between two young women whose lives would never, under ordinary circumstances, collide.

Carthew’s writing naturally blurs the lines between poetry and prose, recalling at times both Joyce and Donne as she explores streams of consciousness, and couples words together to create new terms that express an action, feeling or natural phenomenon more precisely.

Breathtaking, bold, and grittily, messily beautiful, this is a story that will haunt the reader long after it’s over.

21 | In the Sea there are Crocodiles

One night before putting him to bed, Enaiatollah’s mother tells him three things: don’t use drugs or weapons, don’t cheat, don’t steal. The next day he wakes up to find she isn’t there. Ten-year-old Enaiatollah is left alone at the border of Pakistan to fend for himself.

In a book that takes a true story and shapes it into a beautiful piece of fiction, Italian novelist Fabio Geda describes Enaiatollah’s remarkable five-year journey from Afghanistan to Italy where he finally managed to claim political asylum aged 15.

Collaborations and creativity – welcome to the post-COVID edtech revolution

Alex More considers how the profound disruptions endured by schools have helped pave the way...

My letter to parents went viral

I’ve written hundreds of letters to parents in my role as headteacher, but here’s what happened...

The desire among teachers to forge their own professional training path is inspiring, but that... 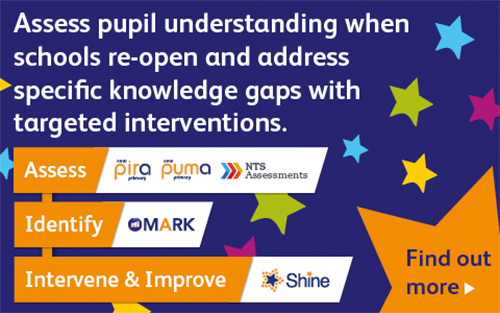