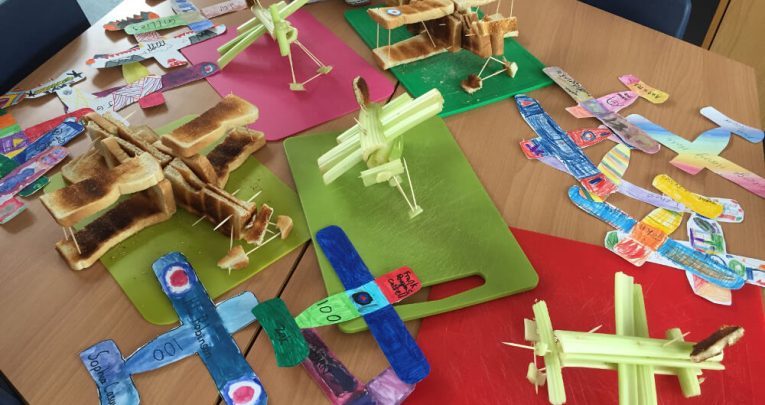 How do you make commemoration accessible for KS1 and 2 students? Vicky Hatchett has some ideas…

Remembering those who died in WWI a hundred years ago involves exploring difficult themes such as service, conflict and, ultimately, death. With primary-age children, this can feel like dark stuff. However, don’t be put off. Commemoration has a place in primary schools and the challenge is to make it accessible.

“I am not a big believer in history for history’s sake,” she says, “But there is real value in giving young children a creative opportunity to remember together through acts of commemoration.”

The organisation has created Remember RAF100, a project aimed at primary schools which is dedicated to a single strand of the complex story of WW1 – the founding of the RAF.

“It gives teachers the chance to explore the excitement of early flight alongside the importance of remembering those who lost their lives in the air,” explains Virginia.

One of the project’s aims is to introduce acts of remembrance and learning about war into KS1. It’s also a great way of starting conversations in the classroom around British values.

Children’s author Jim Eldridge was commissioned to write a series of poems on different themes, including flight, conflict and remembering.

The poetry book is unillustrated and is designed to be taken apart and worked on by groups of children, to then be bound together as a book made together by the entire class. The poems provide a springboard to start exploring these big concepts.

Children from Y1 and 2 of Cranwell Primary in Lincolnshire took part in the Remember RAF100 project. Teacher Sarah Mears-Sagoo says that pupils didn’t shy away from the trickier themes.

“I was so impressed with their response to the poems,” she says. “One six-year-old girl drew a plane covered in musical notes. When I asked her why, she explained that they were the hum of the plane as it was going down, which is why she’d also drawn the pilot with a sad face.”

Connecting with the past

To capture young people’s interest, Virginia believes that commemoration needs to be both fun and memorable. “It has to be creative and allow young people to connect with the past,” she says.

“The resource pack shows you how to build bi-planes out of toast or celery. This is an exciting and memorable alternative to using paper or cardboard.”

The children in Sarah’s class adored this activity. “They took real pride in making them as perfectly as possible,” she says. “In fact, they loved them so much, we still have the planes at school.

They’re starting to go mouldy so I’m going to have to throw them out soon! One hundred years ago is an alien concept to young children, who sometimes struggle to remember a few years back. This is a way to creatively transport them there.”

The power to connect with the past often comes from learning one person’s story. This is especially true when learning about a complex global narrative like WW1.

Y3 and 6 pupils at Farsley Farfield Primary near Leeds focused on the story of Captain James Butler, whose grave is in a churchyard near the school. The school hosted a short service of remembrance where children read a biography of Captain Butler, recited poetry, listened to the Last Post and had a minute’s silence to remember all the pilots who served in the war.

The children also created 440 aeroplanes, each featuring the name of a serviceman or woman from the RAF who lost their life during WW1 and are buried in the UK – bringing it back to a relatable, local level.

Children at Cranwell Primary also made plane tributes for individual pilots. They were each given a name and a few details about the pilot, such as where they lived and what family they had, and were asked to think about their pilot as they decorated their plane.

“In the older class they listened to wartime music as they painted their planes to create a special atmosphere,” explains teacher Sarah. “The children felt they owned their pilot’s story and wanted to share it with others.”

Virginia believes that this oral storytelling is an essential part of making commemoration meaningful. “When young people take ownership of one person’s story and share it with others, they are engaged in active remembering, which is what commemoration is all about,” she says.

Commemorative events give schools the opportunity to invite others in their communities to get involved. Farsley Farfield invited special guests to walk with them to the churchyard and participate in their remembrance service.

The children of Cranwell Primary also participated in a special service of remembrance with friends, family, cadets and veterans at the nearby RAF college.

Virginia considers this one of the key objectives of any commemoration activity. “Commemoration is about remembering together. Joining in an event, hearing stories, remembering individual lives lost – these are all an opportunity to make new connections,” she says.

“Jim Eldridge ends his poem Remembrance with the lines, ‘Remembering is of the past. Remembrance is for the future’. I couldn’t agree more.”

Remember RAF100 is run by Big Ideas and funded by RAF 100 and the Ministry of Housing, Communities and Local Government. To receive Remember RAF100 resources or apply for small scale funding, email rememberraf100@big-ideas.org or visit big-ideas.org.
SHARE THIS resource