back to Literacy hub

Creative Writing is a brilliant activity for the whole class to take part in, so we've gathered six of the best story starter resources, including animations and even the odd iguana, into one convenient package... 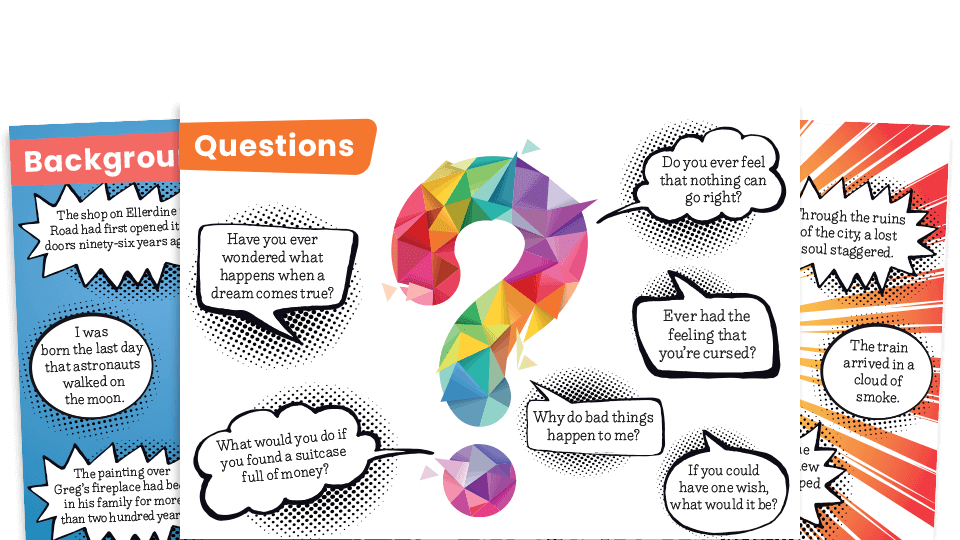 Decorate your classroom with good story starters and ideas for getting going with creative writing with this interactive poster set.

There are seven posters in total, each showcasing different creative writing starters you can use to begin a story: Questions, action, dialogue, background information, introducing a character, describing the setting.

Each poster uses an arresting image to suggest a story and these are accompanied by model opening sentences. Plus there are blank word balloon templates for you to display children’s ideas or to add your own.

Find them all here.

2 | Adventures of a seafaring iguana

This guy was miles from shore when he spotted an exhausted iguana treading water in the middle of the ocean! So he offered him a ride on his boat pic.twitter.com/dUX34I1Hx6

This video introduces us to a man on a boat who crosses paths with an unlikely friend – an iguana treading water – 4 miles out from shore. His scaly companion leaps at the chance of a free ride and stares over the ocean like a grizzled old sea captain as they head on home.

Whilst a touching video, it also provides a great prompt for a creative writing exercise. Students could be tasked to write a short story on how the iguana found his way out to sea, and then share their different versions afterwards.

This clip is an excellent way to spark your students’ imagination. A short animation and voiceover tells pupils they have been accepted into a super secret spy agency operating under the cover of birdwatchers; the writing challenge stems from thinking up details of how this spy organisation operates.

There are plenty of suggestions to help your students get started too, such as:

4 | The oldest message in a bottle

This intriguing video documents the discovery of the world’s oldest message in a bottle by Perth resident Tonya Illman, who stumbled across the missive whilst litter picking on North Wedge Island in 2018.

The 131-year-old note was written by a captain of a German sailing ship, and was thrown from the vessel whilst on a voyage from Cardiff to Indonesia.

After watching the video, it’s likely your students will be curious about what happened to the ship and crew – a thought that would make an exciting writing activity.

What do you think happened to the Captain and his boat?

This pulse-pounding clip follows wingsuit pilot Sam Laming as he becomes the first person to perform a close proximity wingsuit flight down Mount Snowdon in Wales.

Sam spent five years training for this extreme stunt, which should open up plenty of creative writing opportunities for your class, the task being to place themselves in Sam’s position and describe how they would fare with the momentous endeavour. Below are some ideas to help get them started:

You can watch the video here.

This final video contains a series of clips showing different characters, including a pirate, farmer and a fairy. Throughout the video, there are prompts to help pupils think more deeply on the characters they create: “What am I doing? What am I feeling? Who am I?”.

While the footage is starting to show its age, it’s still very effective, and can help pupils take a more nuanced approach to their writing and add some colour to their character descriptions.

Ask your students to take one of the characters shown in the video and write about them. Think about:

The video is available here.

Learn about black history and astronaut Mae Jemison with Look Up!