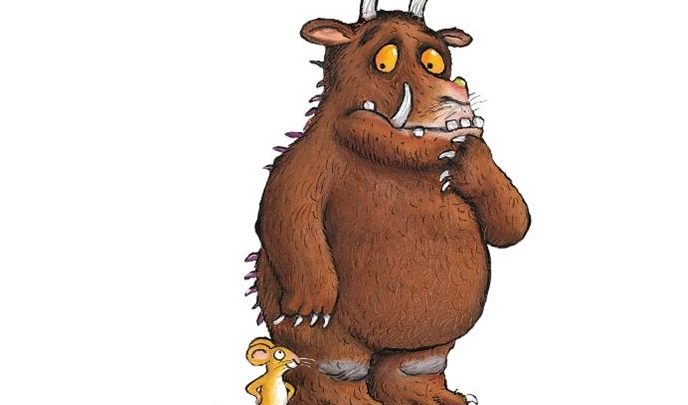 Axel Scheffler looks back over his early inspirations and hugely successful collaborations with Julia Donalidon – and recalls his initial, 'much scarier' imagining of The Gruffalo…

A while back, I was at a flea market and spotted a book that I recognised; it was one of the primers that I’d had when being taught to read at school in West Germany (as it was then) in the early 60s. It looked like it could have been from the 19th century!

I had to buy it, for the nostalgia aspect – in truth, though, I don’t really have very strong memories, positive or negative, about the process of learning to read. My partner does; she tells me about the huge excitement she felt when she could suddenly make sense of road signs and so on, but for me, well, it was just something that one had to do.

I didn’t have many picture books as a child, although I did have one that my father bought from East Germany, funnily enough. But my parents definitely read to me; I have photographic evidence.

Later on, when I was able to visit libraries and seek out reading material for myself, I loved stories – especially when they were told through illustration.

I remember enjoying all kinds of comic books, including a series about a Danish character known as Petzi – he was a bear who had lots of adventures with his animal chums, presented like a comic strip, with no speech bubbles, but captions below the pictures. I definitely appreciated the way the words and images worked together to get the message across.

I always liked to draw. I don’t think my pictures back then were particularly special (mind you, I still feel the same about my work today, so what do I know?) but I produced a lot of them, both in and out of school. I would doodle in the margins of books, or on scraps of paper, and then I started coming up with absurd little characters, which made my friends laugh and of course, that motivated me to do it even more. I suspect that’s how a lot of illustrators start out.

Later on, after a brief and enthusiastic flirtation with the surrealists, I was inspired by artists like Tomi Ungerer; I loved his humour, and also how there are always funny details lurking around the edges of his images. I think children really love seeing things their parents don’t, and discovering those kinds of touches – it works for me, but then, there are many different styles and approaches for producing good picture books.

I know that my artwork is inextricably linked for most children, and their parents, with the stories of Julia Donaldson, and I am very proud of that. I feel privileged to be connected with her words, and happy that we are considered as a team, even though we don’t work ‘together’ as such. It’s amazing to me that my interpretation of what the Gruffalo looks like, for example, is an image that’s already in the head of nearly every child I meet.

That said, the way he appears today is quite different from how I first imagined him. He was much scarier; the editor said I needed to tone him down. Interestingly, when I show children the original version they always seem to prefer him the first way – but I can understand the argument for him being less intimidating. He’s an ambivalent creature, really; he’s not bad, or evil. Just a hungry Gruffalo.

I don’t have a ‘dream story’ that I wish I could have illustrated – I admire Winnie the Pooh, for example, but I wouldn’t want to try and improve on EH Shepard’s interpretation of the characters. It’s perfect; such a classic. I turned down the opportunity to re-illustrate The Wind in the Willows for the same reason. It was different with Old Possum’s Book of Practical Cats by TS Eliot, though; there, it felt like I had room to explore my own ideas.

When I was younger, I thought that maybe one day I could write my own story; but it turns out to be more difficult than I thought. I haven’t quite given up – I like to remind myself that one of my favourite author-illustrators, William Steig, didn’t start writing until he was over 60 – but the fact is, I can’t do plots; I produce one picture, but I don’t know what happens next.

My daughter is eight, and trilingual (her mother is French, and we live in London). Her reading journey has been a good one; she’s surrounded by so many books, in all three languages, that we could open a lending library, and it’s been such a great experience to see a child growing up with so many stories around her.

Perhaps she’ll have the knack of narrative and write something for me to illustrate. In the meantime, maybe I should return to the Gruffalo and try giving him a new look?…