Teach Year 3-6 children all about Ancient Greek Gods, heroes, monsters and more with these great resources for literacy, creative writing and history...

Greek mythology has had a lasting legacy in European culture, with numerous stories, characters, Gods and monsters familiar to many.

Obviously we have Homer’s Odyssey, and its hero, Odysseus, and The Iliad which featured Paris, Helen of Troy, the Trojan War (and the Trojan Horse) and Achilles (with his notorious Achilles Heel).

There’s Ovid’s Metamorphosis, Aesop’s Fables and famous tales of the Clash of the Titans, Pandora’s Box, Prometheus and Icarus.

Want more? Here’s a collection of things you probably recognise from Greek myths.

Features of a myth for KS2

A myth has symbolic meaning and isn’t based on truth. They are often used to explain difficult ideas and concepts, like how the universe started. Myths often feature a long journey or quest, where the hero encounters creatures with supernatural powers. 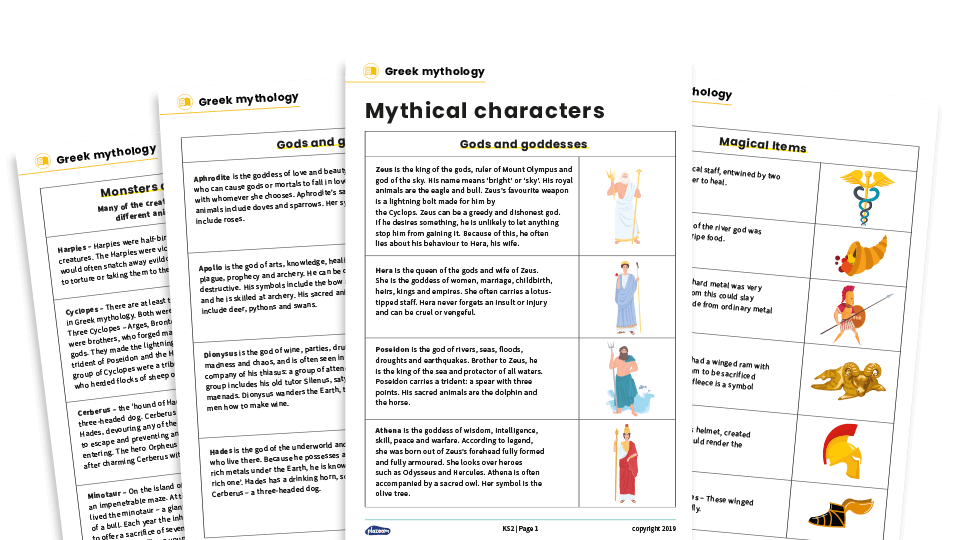 The fact sheets cover Greek gods for KS2, monsters and other characters, settings and magical items. 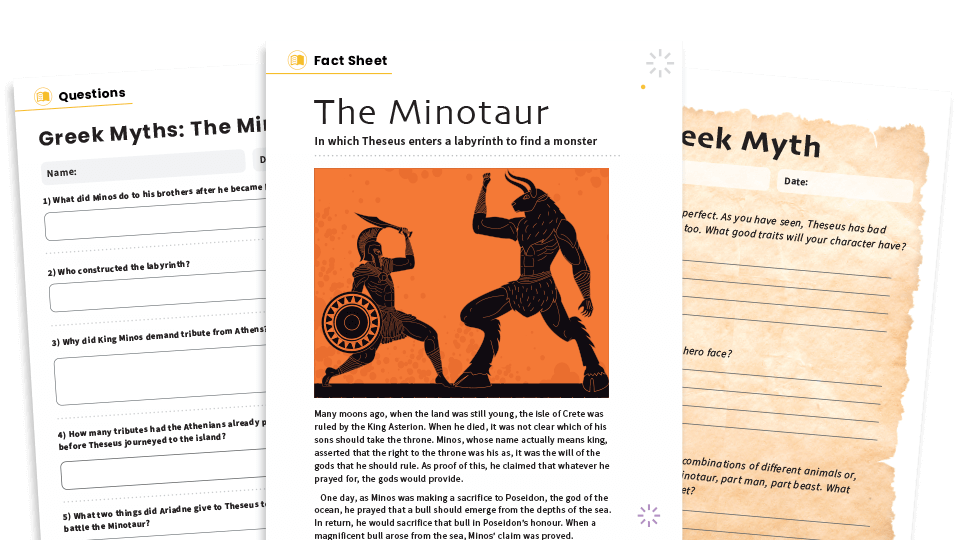 These Greek myth reading comprehension packs for Key Stage 2 retell the famous mythic tales, and test comprehension skills, including inference, and as a model text for story planning and writing activities.

Each text is accompanied by 17-20 reading comprehension questions which target key comprehension skills such as retrieving information, making inferences and understanding unfamiliar vocabulary, including Tier 2 words.

A planning sheet is included for children to plan out their own Greek myth.

3 | Who were the ancient Greek gods and heroes? 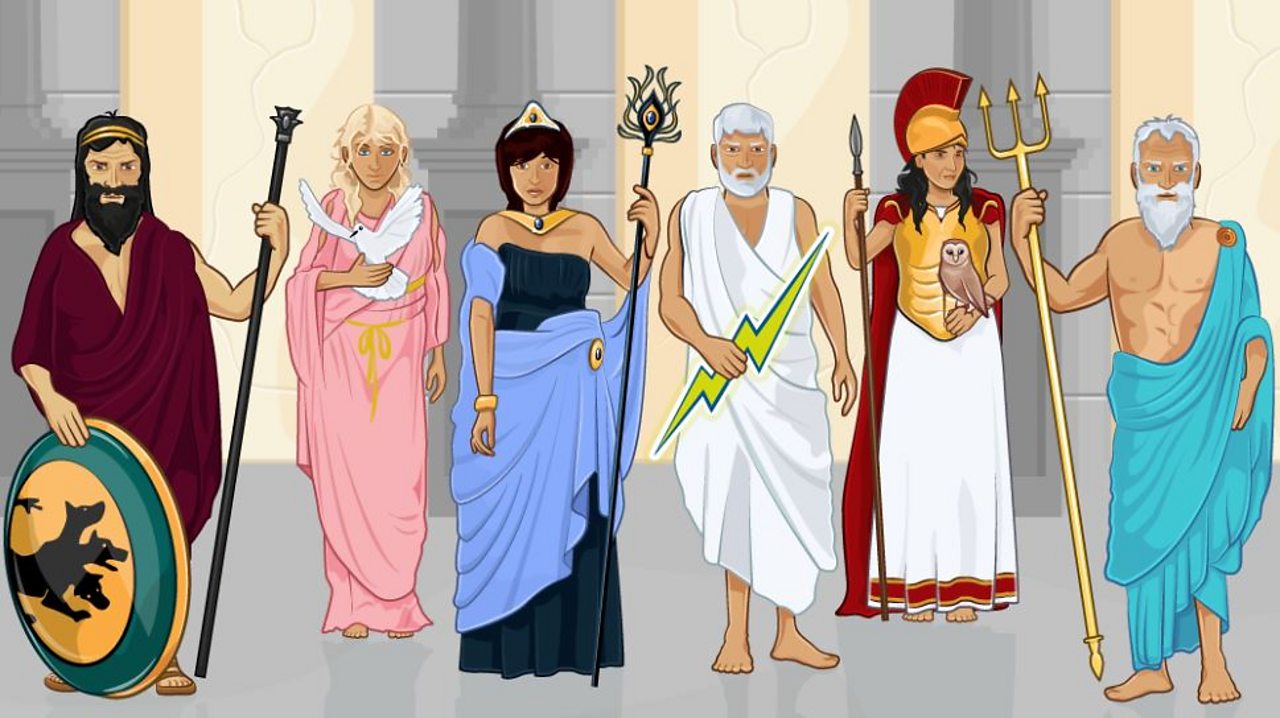 Give students a good interactive grounding on the major players of Greek myth with this BBC Bitesize entry.

They can find out about Gods, what Ancient Greek temples were like and play a fun history game.

Life is not going as planned for schoolboy Elliot Hooper. He’s constantly in trouble at school, but can’t reach out for help because he’s harbouring a secret. His mother is very sick.

Elliot’s mother has dementia and she’s getting worse by the day but Elliot fears telling anyone in case they separate the two of them.

What Elliot isn’t expecting is that rebellious constellation Virgo will come crashing into his cowshed. Virgo has disobeyed the orders of the Zodiac Council and snuck to Earth to give Ambrosia to the mysterious Prisoner 42.

Elliot manages to get swept along, and together they manage to release the death daemon Thanatos into the world. Good going, guys! Can Elliot and Virgo make things right with the help of the Gods?

This book topic features practical activities that look at shifts in formality, discuss dementia and let students become reporters and help you host a mock trial. 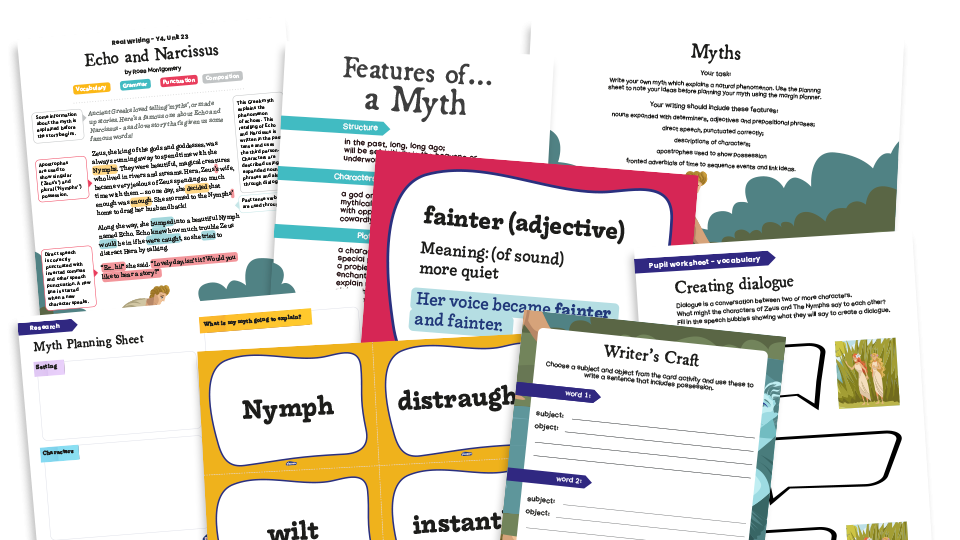 This writing unit for Year 4 is built around an original model text by Ross Montgomery; a delightful retelling of the Greek Myth Echo and Narcissus.

In this 3-week unit, pupils will explore the difference between plurals and possessives and will learn how to punctuate direct speech, creating dialogue between characters. In their final writing task, pupils will write their own myth that explains a natural phenomenon, using ideas from the model text. 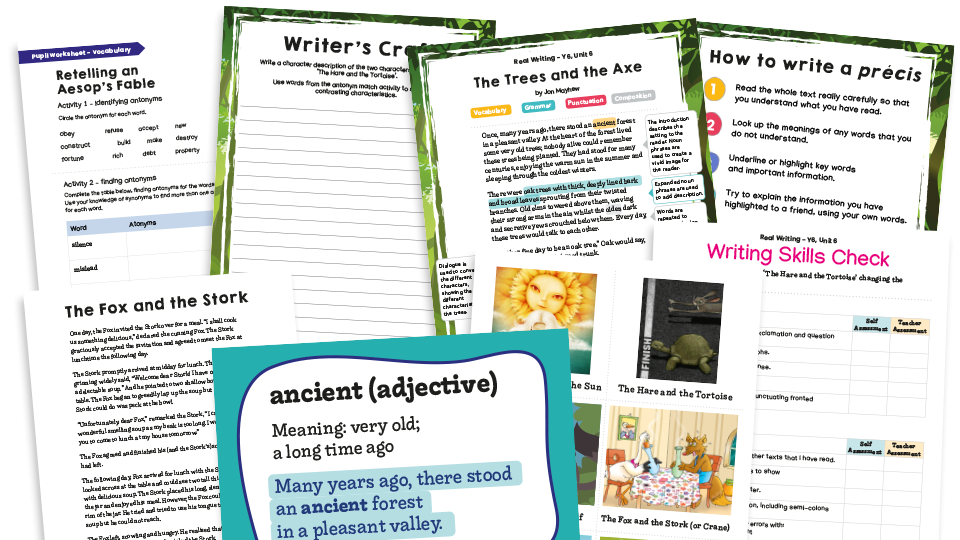 If you want a similar writing unit for Year 6, this one is built around an original model text by Jon Mayhew; a wonderful retelling of one of Aesop’s Fables.

In this two-week unit, pupils will investigate Aesop’s Fables, learning the features of these traditional tales and how they were originally told orally, before eventually being written as a collection of stories.

They will also explore how antonyms are used to describe the contrast in the main characters before finally writing their own version of ‘The Hare and the Tortoise’.

Check out this one here. 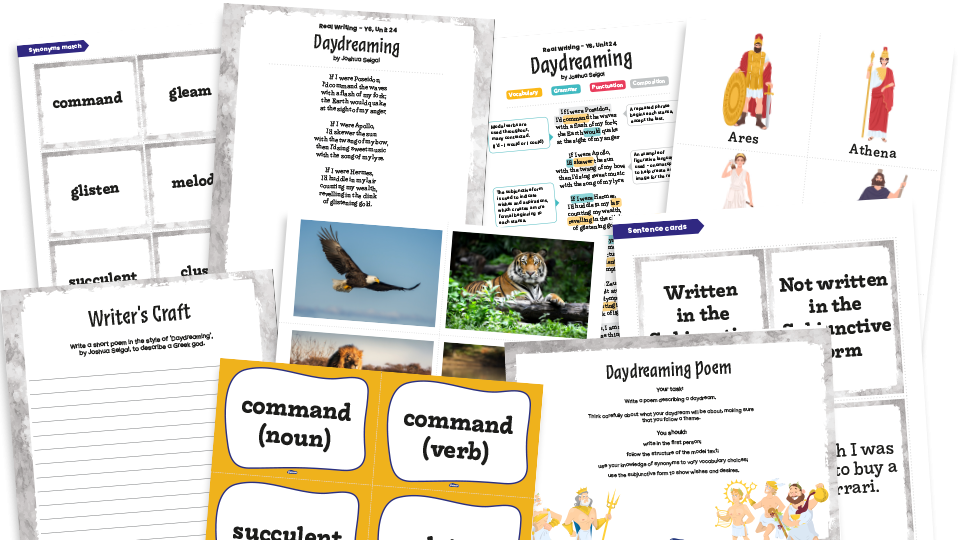 Also for Year 6, but poetry this time, this one uses an original model text by Joshua Seigal; a rich poem in which a child dreams of being different Greek gods.

In this two-week unit, pupils will read a wishing poem describing attributes of some of the Greek gods. Pupils will explore the structure of the poem and its use of the subjunctive form, before going on to write their own poem to describe a Greek god.

And get this unit here. 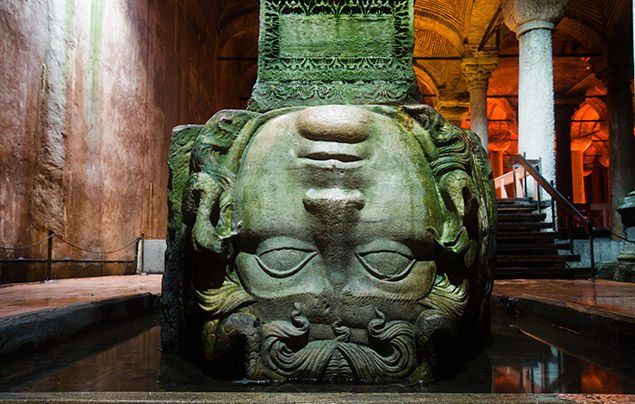 Over at NatGeo Kids pupils can learn about the gods, goddesses, monsters and heroes of Ancient Greece with this great introductory primary resource.

The teaching resource can be used in study group tasks for learning about Ancient Greek mythology and Ancient Greek culture. It can be used as a printed handout for each pupil to review and highlight key information, or for display on the interactive whiteboard for class discussion.

Plus, there’s also this collection of 5 tales about some of the monsters of Greek mythology such as the Minotaur, the Hydra and Medusa the Gorgon.

Collaborations and creativity – welcome to the post-COVID edtech revolution

Alex More considers how the profound disruptions endured by schools have helped pave the way...

My letter to parents went viral

I’ve written hundreds of letters to parents in my role as headteacher, but here’s what happened...

The desire among teachers to forge their own professional training path is inspiring, but that...