back to The Arts hub

Studying Shakespeare's star-cross'd lovers? Well there's no need for your lessons to have a tragic ending with these great resources, ideas and activities

Literary misconceptions throughout history, #1: Romeo and Juliet is a romance.

Let’s run through this shall we? 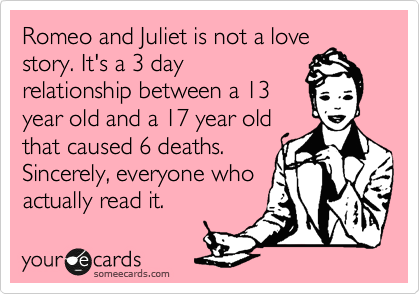 “Ah, but that’s just a cynical jokey internetty thing”. Sure, but it’s pretty clear that Shakespeare went out of his way to show that this young couple were not really in love. For a start, when we first meet Romeo he’s all head over heels for Rosaline, saying things like this:

Well, in that hit you miss. She’ll not be hit
With Cupid’s arrow. She hath Dian’s wit,
And, in strong proof of chastity well armed,
From love’s weak childish bow she lives unharmed.

He’s pretty melodramatic about the fact that she won’t return his “love”. Or more to the point, that she chooses to remain chaste.

But that all changes when he sees Juliet. When Friar Laurence asks him if he’s been with Rosaline, he responds: “With Rosaline, my ghostly father? no; I have forgot that name, and that name’s woe.”

Quick as that. “Oh, that’s because it’s true love with Juliet.” Sure it is. Because everything we know about Romeo up til now points us in the direction of someone who knows what true love is.

Don’t believe me? Just ask Google. It’ll tell you. See: Romeo and Juliet is NOT a love story. It is a cautionary Laptop Case. Wait, what?

But seriously, read this, for starters, on why we should hate Romeo (and, in their words, but also my sentiments, “and not just the Leonardo DiCaprio Romeo, either”), on how he’s actually the villain of the piece.

If they know nothing else about Romeo and Juliet, you students will probably at least know them as the most famous couple in literature. So that’s a good a place as any to introduce the play and its themes.

Create self portraits using everything from recycled materials to Photoshop

Everything you need for every subject across Key Stages 3 and 4.