We’ve had to put up with a lot of waffle being spouted in the UK for some time now. From imaginary millions that the NHS will 100% definitely receive that’s currently going to Belgian killjoys or something to talk of improving education for all by removing restrictions on elitist institutions. So it’s always fun when someone gets to call a spade a spade, or the PM a pillock.

One of the joys of the internet is that we all get a chance to make that call now, even if it is usually drowned out by the various ‘lulz’ and ‘bantz’(or, as they’re more commonly known in real life, awful behaviour).

Fear not, we’ve dug through the dirt to find the finest (and funniest) truffles of Twitter comments, satirical headlines and protest slogans that perfectly, often brutally, offer the powers that be a bit of comeuppance.

Not that they generally listen to us, but there you go.

“It’s the ability to rattle off a long list of facts and figures without any real understanding of the context that will make the UK strong again,” said Gove. “Clearly the reason so many young people are unemployed is their inability to recite long passages of George Eliot’s Middlemarch in job interviews.”

Just one of the many gems from The Poke’s take on Govian policy. Read the full thing here.

We think someone doubts that Gove was ever qualified in the first place.

Ridiculous that Michael Gove has been moved from Education Secretary to Most Influential Artist in Black and Urban Music.

A great gag from someone whose Twitter bio brilliantly reads:
‘My dyslexia has reached a new owl’

Gove’s replacement Nicky Morgan fared little better, and when she was axed in Theresa May’s cabinet reshuffle the always excellent Debra Kidd showed us all the classy way to stick the knife in.

@NickyMorgan01 Best of luck Nicky. I'm hugely relieved as an educator, but wish you well.

5. Others were less sympathetic

As Nick Gibb explains the government’s Academies plan, the laughter from the crowd is cringe-worthy enough, but one heckler gets right to the point by very audibly calling out the nonsense spewing from his mouth, simply by shouting out a different part of the anatomy. Watch it here.

Theresa May’s staunch march down this path hasn’t seen her come across as the least ogre-like person either.

@youngvulgarian @TSEofPB Look, she didn’t eat any of them. It’s a start.

8. A new twist on an old classic

On to some American protests now, where sign-slogan writers have really upped their game.

9. So that’s what Breaking Bad was really about

This Chicago resident is clearly furious with the mayor 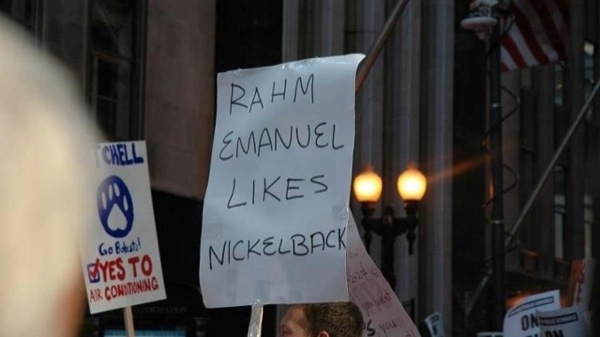