Nursery rhyme-rich environments lead to fantastic early language development – but you may need to find ways to encourage parents to sing at home, says Chris Williams...

Would it surprise you to hear that 33% of parents believe traditional nursery rhymes belong in the past?

In an age in which we are surrounded by technology, where it’s not unusual to meet a toddler who can happily swipe their way around the functions of an iPad, should we even be interested in reviving mums and dads’ interest in ‘Baa Baa Black Sheep’ and the like?

Well, yes – singing songs and rhymes to children during their early years is vital for a range of reasons, as I’ll explain. But this isn’t about rejecting the here and now in favour of the past – technology can actually play a part in encouraging parents to sing these time-honoured ditties to their children.

The power of rhymes

This is an issue, because as the Sutton Trust highlighted in its 2014 ‘Sound Foundations’ report, “Using familiar songs and rhymes, including those with movements, can help to foster children’s early language skills”.

Similarly, in her book The Genius of Natural Childhood: Secrets of Thriving Children, Sally Goddard Blythe recommends that parents sing to their children on a daily basis to avoid future language problems: “Singing lullabies and using music gets a baby ready for language at a young age.”

As such, the above statistics are a reminder that those working in early years settings must continue to share and promote the value of nursery rhymes, and not underestimate the powerful role they can play in children’s development.

There are lots of things you can do to make nursery rhymes more engaging in your setting and at home. For example, choose a familiar rhyme and change a few of the words to personalise it for different children. It might be something as simple as replacing ‘Jack’ with your child’s name in ‘Jack and Jill’, or a complete rewrite to fit in with a particular interest.

For example, for Jacob – who loves rockets and astronauts – we borrowed the familiar tune of ‘Baa, Baa, Black Sheep’ and came up with, “Flying spaceman, going to the moon; goodbye spaceman, come back soon!”

This approach can also help engage parents who feel nursery rhymes are old-fashioned and no longer relevant. It is the tunes that are memorable; the words can easily be changed to achieve the same effect. Have a go – it’s simple, lots of fun and can also support creativity in children, who will enjoy contributing their own ideas for new words and rhymes.

Sometimes, it’s just a case of finding the right rhyme. Alison, an early years teacher working at a primary school in Yorkshire, has been trying to increase the use of songs in her classroom. “The children in my setting generally know some of the very well-known nursery rhymes, such as ‘Twinkle, Twinkle, Little Star’ and ‘Baa, Baa, Black Sheep’,” she explains, “but I do find that after a while some are less keen to sing them, as they are deemed a little babyish.

“That’s why I like to introduce lesser-known ones like ‘Diddle, Diddle, Dumpling, My Son John’, ‘Ding Dong Bell’ and ‘Sing a Song of Sixpence’. The language really engages the children, and they are much keener to join in. We recently had lots of fun during our pirate topic, changing the lyrics together from the sea shanty ‘What Shall We Do with the Drunken Sailor?’ They loved hearing their names incorporated into the song – for example, ‘What shall we do with steady Freddie?’ – and even came up with their own ideas.”

You might also like to try a more high-tech approach. For the past two years I have been working alongside practitioners in a number of children’s centres, with the aim of both building an increased repertoire of songs and strengthening partnerships with parents and carers.

Nursery rhymes have been central to the project. Each week, at stay and play sessions, there is a singing activity where practitioners lead the singing, and parents and their babies and toddlers join in. Whenever new songs are introduced, a recording is made and sent to parents via email or text message following the session.

We have been using Chatta to support this process, and extending the range of audiovisual content the children’s centres share with parents to include familiar stories, as well as descriptions of memorable and significant events. One of the advantages of Chatta is that it captures images and spoken language in a way that can be shared and replayed anywhere.

The response has been positive and the impact significant. Over time, more and more songs are being shared. Parents are listening at home and singing more frequently with their children, all the while accruing a collection of songs that they can access on their smartphone wherever and whenever they want.

Sometimes we change the words to make the songs more appealing to certain children, and have also included traditional songs from different cultures, shared by parents who speak English as an additional language.

This is a great example of how the power of technology can be used to capture and share good practice and good ideas. The songs shared by the children’s centres’ practitioners provide a growing and invaluable resource for parents, with an outcome that all the research tells us we should strive for – more singing with our children.

The benefits to children of frequently sharing nursery rhymes include…

• Increased vocabulary
Songs and rhymes can introduce children to the meanings of a huge number words, and can also support the development of memory skills.

• Sequencing skills
Singing the same song to children on a regular basis allows them to anticipate and predict what is coming next, and build a sense of chronology.

• Support with routines and transitions
Familiar songs are comforting and can be easily applied to a range of circumstances, including bedtime, saying goodbye or putting toys away.

Chris Williams is the founder of Chatta – a suite of training and resources designed to deliver an immediate impact on children’s speech and language development; for more information, visit chatta.co.uk or follow @hellochatta

Read more about Paradigm Trust’s approach to science and how to use these resources here.

Paradigm Trust’s focus on bridging the science gap began in 2017. At the start of the autumn term...

New legislation in Wales outlaws physical punishments for children – teachers have a role to play...

Morgan Rush explains why, as a trans school pupil, he’s urging all teachers to celebrate School...

Teacher CPD – Is it time to start policing the providers?

Katy Chedzey explains why a system of quality assurance could be the key to improving...

Student health and wellbeing – Can negative moods be ‘contagious’?

Adam W. Hunter finds out whether a recent scientific study examining how teenagers can ‘catch’ moods... 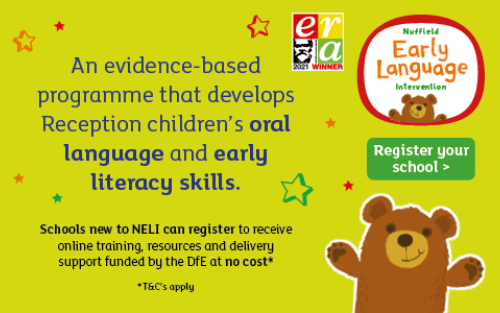