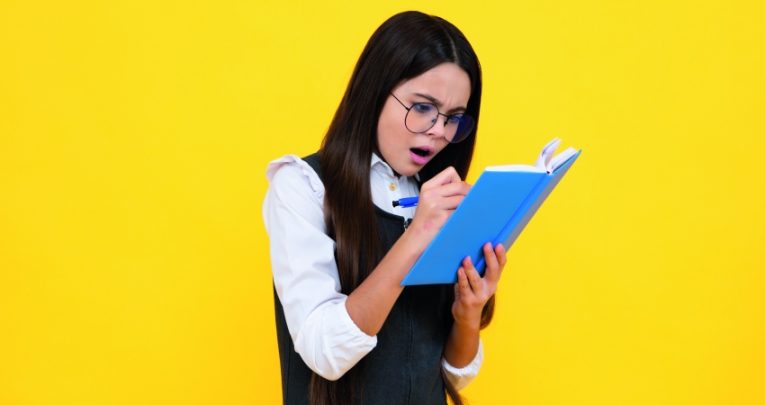 You’re not an audiobook, and your students aren’t there to copy down everything you say – but you wouldn’t know it from the attitudes to notetaking seen in many secondary classrooms, observes Matt MacGuire…

During my time as head of sixth form, I noticed a phenomenon. In subjects that were text heavy, where sources, novels or social theories needed to be studied in detail, some students would make copious and beautifully presented notes in every lesson.

Their folders became artefacts – precious receptacles of the knowledge doled out by their teachers in lessons. If a teacher tried to move on from a particular PowerPoint slide before these note-takers had copied down every last word, they’d panic, raise their hand and ask for another minute. Sometimes they would ask permission to take a photo of the slide so they could copy it down later.

I’d say that the most beautiful, well-organised and comprehensive folders I saw across sixth form subjects usually belonged to girls, though not always. These were hard-working and conscientious students – though not necessarily
those who learnt the most in lessons.

After much thought, I eventually came to the conclusion that these beautiful student folders were pretty much useless. Please – bear with me…

Ultimately, the proper receptacle for knowledge and skills is our students’ long term memory. Folders full of notes are of no use in the exam hall, nor in the real-world application of knowledge. At best, they’re a place where students write down the things they want to store in long term memory. They’re a kind of temporary holding pen, where students jot down salient information from the lesson in order to refer to it at a later date – typically in preparation for an assessment or examination.

And yet, this makes no sense. If the purpose of note-taking in lessons is to create a revision resource for future use, why don’t teachers obviate the need for note-taking altogether by providing centrally-produced revision notes? The cognitive load created when students are required to listen and take notes at the same time is suboptimal, and produces an unnecessary split in attention.

If you want students to really listen to you, don’t task them with writing down every word you say, or the text displayed on your PowerPoint slides. You want them to feel they can give their full attention to listening and understanding. Your job isn’t to create human photocopiers.

To reiterate the point, notes in folders are useless unless they translate into knowledge, because notes themselves aren’t knowledge.

On that basis, we could make the argument that students shouldn’t take any notes in lessons at all, since doing so detracts from their ability to focus on explanations and new information. However, that argument isn’t quite right either.

I believe that note-taking can play a role in memorisation (i.e. learning), but is of little to no use when it amounts to mindless, verbatim transcription. If we want students to have written records of the material covered in class, then we should provide that. At least we know it will be free of errors and produced by an expert.

If we eliminate the creation of revision material, then what purpose for making notes remains? I believe that for it to have any real utility, note-making needs to facilitate thinking and learning in the moment. So how can we make sure that the process of note-taking doesn’t preclude thinking?

One way of making students think while taking notes is to require that they be selective about what they write down. If students are allowed to only make brief notes – a few words, no full sentences – they’ll need to actively think of how best to summarise each idea. When students take notes in this way, their writing becomes an externalisation of their summative thinking, rather than a verbatim replication of the verbal input. They have cognitively manipulated the content before reproducing it in a more concise form.

This demonstrates thinking and at least a degree of understanding. Teachers can provide constraints that force students to aim for concision in their notes – allowing limited space for note-taking on each topic, or simply limiting the time provided for note-taking should suffice.

Alternatively, teachers can prohibit note-taking during instruction, but allow students to try and write down what they remember after the explanation has finished. This forces students to think and try to recall what they have just heard, but resulting notes may not be accurate, and therefore not necessarily serve as a useful revision resource. Teachers will have to provide centrally produced and quality assured revision notes for that purpose themselves.

The point I’m ultimately making is that teachers should think very carefully before requiring students to take notes. They might record the information on paper, but the cost of doing so may be that they can’t simultaneously record it in their memory.

Another way of scaffolding students’ thinking during note-taking is to use graphic organisers. The best I’ve personally seen is the Cornell notes method, which I shared with all of our sixth form students at the outset of
their studies.

It’s a method that provides students with a template which allows them to order their thoughts. A quick Google search will quickly provide you with plenty of free downloadable Cornell notes templates.

Like all graphic organisers, the power of the Cornell method lies in how it scaffolds the thinking process for students. First, students are allowed to make ‘stream of consciousness’ notes in a main note-taking column. They can record anything they feel is important but must still be selective, since there isn’t the space or time for verbatim transcription.

Next, they add keywords, subheadings or cues on a left hand column as they begin to summarise parts of the content. Finally, a separate summary section is used to draw out the most important pieces of information from the lesson. A good approach is to ask students to fill in this section after the lesson, possibly even the next day, to facilitate retrieval practice.

There are a range of free graphic organisers available online that can be well worth investigating and trying out in lessons. They’re easy to reproduce freehand, so you don’t necessarily need to photocopy mountains of worksheets. Students could even create the diagrams themselves in their exercise books.

Graphic organisers help with note-taking, in that the way learners organise information on the page influences how they think about that information. A Venn diagram promotes comparative thinking. A mind map can help organise thoughts into hierarchal topics and subtopics. A timeline promotes chronological thinking. Flowcharts are great for scaffolding thinking about processes, and can help make explicit the causal links between different stages in a complex process.

In each case, the graphic layout of students’ notes make explicit connections: ‘This information is the opposite of that information’; ‘This process catalyses the next process’; ‘This event happened chronologically earlier than this event’. All require thinking during the note-taking process, thanks to students needing to deploy their notes appropriately within the particular graphic organiser selected by the teacher.

Remember, notes aren’t knowledge. Unstructured and mechanical copying down won’t lead to learning, but by adding appropriate restraints, we can introduce desirable difficulty into the note-taking process itself. We can turn an otherwise mindless activity into an exercise in powerful thinking.

We can guide our students to summarise, compare, sequence or categorise. We can require them to retrieve information, instead of simply copying it down immediately. The golden rule is this – if they aren’t thinking, they aren’t learning.

From passive to active

If you want to turn your students’ passive note-taking into a process of active thinking, try the following:

Matt MacGuire (@MacGrammar) is an assistant headteacher; this article is based on a post originally published at his blog, Ten Rules for Teaching