Alliteration – 11 amazing activities and ideas for KS1 and KS2 English 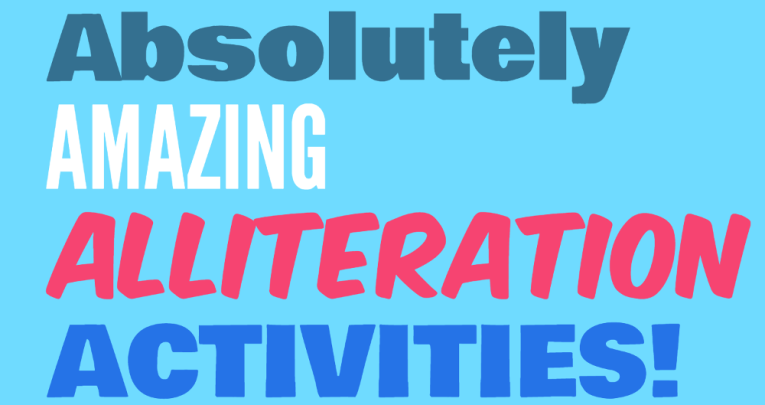 Whether you want wonderful worksheets, brilliant book topics or long lists of alliterative examples, these resources can help kids grasp this topic faster than you can say 'She sells seashells by the sea shore'…

Literary Devices defines alliteration as: ‘A stylistic device in which a number of words, having the same first consonant sound, occur close together in a series.’

Does alliteration have to use the same letter?

No, just the sound. So a hard ‘c’ and a ‘k’ still count together, as in ‘The kite clung close to the clouds’ as would phrases like ‘the naughty gnome’ or ‘Now you know’.

The above page explains the vital role alliteration plays in poetry and prose, saying ‘It creates a musical effect in the text that enhances the pleasure of reading a literary piece. It makes reading and recitation of the poems attractive and appealing; thus, making them easier to learn by heart. Furthermore, it renders flow and beauty to a piece of writing.’

Examples of alliteration in literature

Lolita, light of my life, fire of my loins. My sin, my soul. Lo-lee-ta: the tip of the tongue taking a trip of three steps down the palate to tap, at three, on the teeth. Lo. Lee. Ta. She was Lo, plain Lo, in the morning, standing four feet ten in one sock. She was Lola in slacks. She was Dolly at school. She was Dolores on the dotted line. But in my arms she was always Lolita.

‘So we beat on, boats against the current, borne back ceaselessly into the past.’

Double, double toil and trouble; Fire burn and caldron bubble. Fillet of a fenny snake, In the caldron boil and bake; Eye of newt and toe of frog, Wool of bat and tongue of dog, Adder’s fork and blind-worm’s sting, Lizard’s leg and howlet’s wing, For a charm of powerful trouble, Like a hell-broth boil and bubble.

Double, double toil and trouble; Fire burn and caldron bubble. Cool it with a baboon’s blood, Then the charm is firm and good.

Deep into that darkness peering, Long I stood there wondering, fearing, Doubting, dreaming dreams no mortal ever dared to dream before

From forth the fatal loins of these two foes; A pair of star-cross’d lovers take their life.

You’ll find alliteration wherever people want to create something memorable. From companies like Coca-Cola, American Airlines and PayPal to fictional characters like Willy Wonka, Peter Pan, Dr Dolittle and King Kong or groups like the Famous Five or Secret Seven.

It should come as no surprise that Hulk Hogan was just his wrestling gimmick, but Terry Gene Bollea didn’t seem quite as tough.

We’ve provided a whole bunch of lists by category at the end of the article if you want to use them to show your class.

Enough flexing, let’s get on to the resources.

This writing review worksheet is an excellent way to revise and practise using alliteration in KS2. It contains examples of alliteration and five different alliteration challenges which can be used during one lesson or spread over a number of teaching sessions.

Questions encourage creative responses as well as revision, and include interesting images to stimulate ideas.

This excellent KS2 lesson plan uses Roald Dahl’s classic George’s Marvellous Medicine to learn all about the power of words.

There’s a starter activity, three main activities and an extension for children to work through in this resource, which will help them identify alliteration, onomatopoeia and rhyming patterns in Roald Dahl’s poetry and exploring their effect on the reader.

Activities include writing an original poem using Roald Dahl’s work as a model, using the Revolting Rhymes resource to come up with new rhyming words for Roald Dahl’s poem, and using alliteration to come up with their own disgusting ingredients to drop into George’s mixture.

There’s even a great piece comparing Dahl’s alliterative style to the Three Witches of Shakespeare’s Macbeth.

Designed for Year 3, this is a good entry point for teaching alliteration to children.

The PowerPoint (also available to download as a PDF) lets students listen to sentences like ‘Carmen carefully caught Carl’ to notice the alliterative sounds, explains what alliteration is, then asks them to come up with alliterative names or phrases.

The worksheet then has 15 fill-in-the-blank questions and an extension activity.

4 | The special skills of Speckle the Spider

Sunnyside School, Tina Tarantula, Freddy the Freakshow Flea, the Big Banana Boat – this story is jam-packed with alliteration. As you begin the book, start a class comment board to collect all the examples children come across as they read (there are lots).

Consider the effect alliteration has on us as readers. Does it give us a clue to a character’s personality (eg Freddy Fearless) or perhaps make a headline eye-catching (eg Rare Spider Spotted in Surbiton)?

It is great for pupils to be able to spot techniques, but essential they understand why, as writers, they might bother to use them. The effect on the reader is, of course, always key – a great message for young writers.

5 | Alliteration in nature with Over and Under the Snow

Kate Messner’s delightful picture book, Over and Under the Snow, tells the story of a small girl whose father tells her about all the creatures that are hidden beneath the snow, in their ‘secret kingdom’ – shrews, deer mice, voles, bullfrogs, beavers, even bears.

In this book topic from Sue Cowley there’s a whole activity on how Messner uses alliteration in her story: “frosted fresh”, “a flash of fur”, “leftover leaves”, “winter white”.

As you read the story to the children, bring out the alliteration by emphasising the repeated consonant sounds, then ask the children to write an alliterative poem on the subject of snow.

Get the free book topic here.

Over on Teach It Primary there is a nice selection of different alliteration worksheets.

More headline writing with this activity which lets you write alliterative newspaper headlines for well-known nursery rhymes (and includes examples).

Another looks at tongue twisters, where pupils complete a parts of speech table to generate their own.

Click the links above or check out the whole selection here.

These 5 ideas for exploring alliteration from Kirstine Beeley were designed for early years, but you might find a spark in there you can adapt for KS1 or even KS2.

Check out her ideas here.

Harry Potter has many an alliterative character name, so if kids want a bit of fun they can try this quiz that gets them to recall 26 of the most referenced ones in the books.

As promised, if you wanted some examples of alliteration from various parts of popular culture, here they are:

Comic books are a goldmine for alliterative names. They are everywhere. Marvel Comics are especially guilty, which as this article explains is simply because Stan Lee was creating so many new characters in his heyday, that he found it easier to remember them if they were alliterative.

Here are some of the major examples of comic book characters with alliterative real or superhero/villain names: