Hyperbole – 8 of the best examples and resources for KS2 English

What's the best, most-useful, and worthwhile SPaG topic you can teach? Hyperbole of course. It's awe-inspiring. So we've picked out the greatest, most-fantastic activities, ideas and more for you to use...

Exaggerated statements used for effect, not meant to be taken literally.

How do you pronounce hyperbole?

So it’s not pronounced hyperbowl?

No. Definitely not. Never.

What are hyperbolic functions

Hyperbole can be used for comedic effect or persuasive reasons. It helps to emphasise your point by over-stressing the qualities involved.

Think of Muhammad Ali’s famous line about how he “floats like a butterfly and stings like a bee”. All he’s basically saying is he moves around the boxing ring well, and punches hard and fast, but that’s not quite as catchy.

He really did put the ‘hype’ in hyperbole

Here’s an example you may be familiar with:

Sorry to break it to you, but that mug little Timmy got you wasn’t 100% accurate.

This is still good though

Wherever you rank, hopefully these resources can help.

The English language is full of hyperbolic expressions, so much so that you probably don’t even think about them. Think about how often you’ve said you’re starving, or freezing, or boiling, that someone’s said it’s blowing a gale, or that things are moving a hundred miles an hour.

Then you have actual expressions like ‘it’s raining cats and dogs’ or ‘I’m so hungry I could eat a horse’.

Have you ever seen someone who is actually ‘as high as a kite’? Is the local shop really miles away? Will it take forever to get there.

And that’s before we get to the hyperbolic use of the word ‘literally’ that gives it the complete opposite meaning to its intention and renders the word useless. Do we have to say “literally literally” now if we mean ‘literally’?

If you’re looking for a good list of examples, this one has 50 to show to kids, or to pick and choose from. 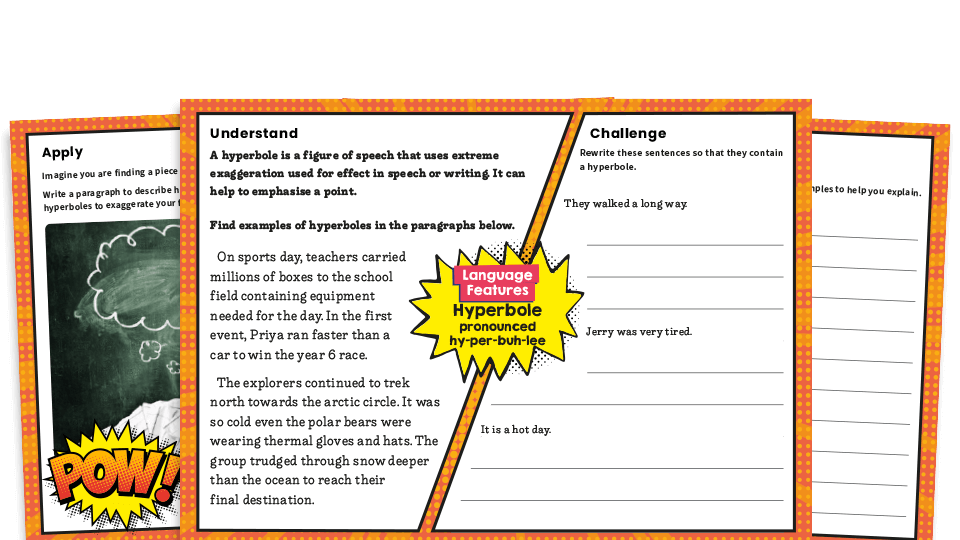 This worksheet is an excellent way for KS2 pupils to revise and practise recognising and using hyperbole as a feature of writing.

It contains examples of hyperboles and five different challenges, which can be tackled during one lesson or spread over a number of teaching sessions.

Questions encourage creative responses as well as revision, and include interesting images to stimulate ideas.

Get these worksheets here.

This catchy little tune and its accompanying video is a fun way to introduce kids to the concept of hyperbole and its uses.

It is American, so you might need to explain what an Ivy University is or who Paul Bunyan was, but the key concepts they’ll need to know are all here.

Alternatively, friends of Teachwire Mr A, Mr C and Mr D put together this great song and video with a bunch of examples and some great explanations of this linguistic technique.

This guide to hyperbole may only have three entries – forever, endless and everything – but it uses each in a sentence then explains why in each context the word is being used as hyperbole, and not literally.

Songs are full of hyperbole. Love songs especially. What better way for the singer to express their emotion than to talk about broken or bleeding hearts and how their love will live on for a million years or whatever?

You can probably think of a few already, but we’ve listed some here with links to lyrics videos for ease.

If you want a selection of poems that use hyperbole, this website has a bunch.

Obviously adverts are full of exaggerated boasts – whether it’s a sugary sports drink giving you wings, a barely-drinkable beer claiming to be probably the best in the world or a completely undrinkable one claiming to be ‘the king of beers’.

The above Prezi presentation has a few good examples, plus there are a number of others you can probably recite from memory: