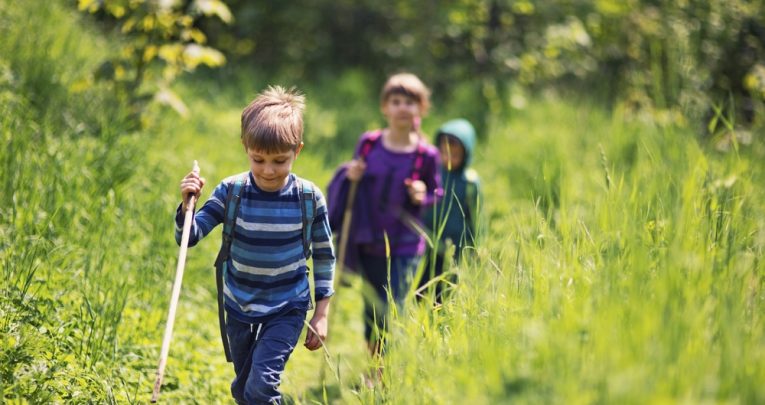 Are reserves of grit and resilience running low in the classroom? It’s time your class took a walk on the wild side, discovers Anna Blewett…

Breathless, shaking and plainly on the brink of tears, Stephen stumbled feebly down the steep bank, desperately clinging to the encouraging words of the instructor ahead.

Having reached his limitations, and exhausted from the most physically challenging day of his troubled life, he blindly followed his guide to the bottom of the long slope. Finally, fear gave way to a tsunami of relief and joy at having persevered – beyond expectations – to finish a journey of which he could feel proud.

Working at something real

OK, so this particular ashen-faced pupil was TV wit Stephen Fry, and his instructor Bear Grylls. The scene may have come from one of Channel 4’s more successful Wild Weekends, but it’s a scenario familiar to teachers at The Spinney primary school in Cambridge.

Here, a neighbouring pocket of abandoned woodland has provided a rich environment for the kind of wild adventures that our parents’ generation might have taken for granted. “We invite the children to take the lead, and we travel alongside as fellow explorers,” says Ruth Sapsed of Cambridge Curiosity and Imagination – a creative organisation working with headteacher Rachel Snape to facilitate regular visits to this urban wilderness. “Empowering them means they find things they’re passionately interested in. Resilience comes because they’re working at something real; they find their own problem and get on with it.” Ruth cites the example of a child in early years who was inspired by a huge piece of wood tangled into the overgrowth. “He wanted to move it across the woods, so he recruited all of us to help. Then, the children collectively decided to throw it in the lake. So they did. We don’t suggest that they do – it wouldn’t be very interesting to them if we did!”

Ruth believes escaping the ‘owned’ space of the classroom is key to discovering children’s latent resilience. “There are twins in one of the classes who have poor motor skills and generally find physical activities hard, but we have been amazed at how they set themselves tasks – climbing trees and scrambling over things. Their teacher says if we set up similar challenges in the in the gym they wouldn’t engage in them. Our experience is that the children are much more powerful in the wild space.”

Another advocate of the Gryllsian approach to empowerment is Simon Dean. As founder and chief exec of Challenger Troop, a DfE-endorsed provider of military-ethos intervention courses for children at KS2 and above, he’s been bringing backbone to disengaged pupils through a combination of strong discipline and physical challenge in the great outdoors.

“I was fortunate; I grew up with lots of trees to fall out of and bikes to crash,” he starts. “I wonder if children are getting a childhood now. They are certainly not able to really test themselves in the right way at the appropriate age.” Giving them that chance transforms groups of often vulnerable or troubled pupils into uniformed and drilled cadets, coached through assault courses and across hostile terrain by carefully selected instructors. “It’s not about shouting or aggression,” says Simon. “It’s about engagement and respect.

‘The military ethos is a façade; we’re not turning them into soldiers, but using methods that have worked for hundreds of years to get them to collaborate, cooperate and join in through very challenging circumstances – empowering children to appropriately exercise their will. There’s no such thing as failure. Every child will have a success in their own way as long as we recognise that achievement.” Not that the benefits aren’t academically significant. “We had one boy join us at the start of a programme who was very baby-like at eight years old, and whose reading and writing levels were on the floor,” says Simon. “After six weeks, attending training one day a week, this kid had gone from floor to Level 3 reading and writing. We put him back in the education system with this huge result.”

You don’t have to take Simon’s word for it. An independent evaluation of Challenger Troop’s methods by researchers at the University of Brighton identified significant gains in the government-identified characteristics of grit and resilience. The study found that 84% of pupils engaged in activities they’d previously felt beyond their capability, and that lasting improvements were made to children’s classroom behaviour.

Taking lessons learnt from the wild back into the academic environment is an interest of Kate O’Brien, a senior instructor at The Outward Bound Trust. Working with small school groups aged eight and up, the charity leads five-day expeditions into the wilds of Snowdonia, The Highlands and the Lake District.

“Our courses often start with a jump into water from a jetty,” says Kate. “It gives the instructor the chance to discuss what ‘challenge’ feels like. Beforehand the group might feel a bit nervous and shaky, and maybe those are the anxiety feelings they get in class sitting an exam, or giving a presentation, or even just putting their hand up.

‘They can explore those emotions and link them back to their experiences of education. It’s important to normalise those reactions; often kids think ‘I have butterflies, I feel really scared, that means I shouldn’t do it.” Supporting children to persevere beyond the impulse to stop might begin with an arduous albeit rewarding mountain walk or a day-long canoe journey, but Kate believes the process continues in the classroom.

“The class teacher or assistant is with them for the week and witnesses them developing coping strategies that perhaps they haven’t seen in the classroom. They’re there for the highs and lows, and that balance is very important. The kids learn that they’re not always going to love what they’re doing, but there’s a link between the effort they put in and the reward at the end.”

Should you ever find yourself weekending with Bear Grylls, that’s something to remember.

Vanessa Lindsay is early years co-ordinator at Two Village C of E Primary in Essex, where a curated garden has proved the perfect environment to build grit…

In many ways, our Garden of Curiosities is a continuation of the classroom, but the opportunity to work in a bigger space allows the children to collaborate and persevere. We’ve definitely noticed that when the children are working on something they find challenging, they keep going in a way that can be difficult in an enclosed environment.

In the garden the children often work or play lying down, or standing up, or leaning against something. That freedom of movement is really important. In my class I’ve got one little girl who struggles with physical activities and is not very resilient; outside she’s loved building a ‘three bears’ cottage’.

Our role as staff is to be really flexible and not too intrusive. The children naturally stick at a task longer if it’s their own idea, but beyond that we support them through gentle questioning: ‘How could you do that differently? Do you need more tape to stick that together?’ We always start the year with children who say ‘I can’t go out, it’s raining’ – but actually, they love being out on really rough and windy days. Getting muddy, getting wet, touching things they haven’t touched before. Young children really learn through their senses, and resilience is a huge part of their active learning.