The possibility that robots could take over our jobs is becoming increasingly likely, with tasks ranging from building cars to writing news reports and brain surgery now capable of being performed by machines. But could they also take the place of learners in schools?

That’s what the AV1 from Norwegian company No Isolation) does – not to displace human children from the classroom, but to act as a stand-in when they can’t get there themselves.

The idea originated when Karen Dolva, one of No Isolation’s co-founders, met Anne Fi Troye, a mother who had lost her teenage daughter to cancer. Anne told her that the worst aspect of the condition had been the social isolation that accompanied her daughter’s hospital stays and deteriorating health. Karen resolved to do something about it, and thus AV1 was conceived.

First developed in Norway in 2016, the machine reached the UK in autumn last year. Intended to provide a link to the classroom for children and young people who can’t be there in person, it’s about the size of a kitchen blender, made from tough, translucent white plastic and weighs less than a bag of flour.

Two front-facing lights resemble a pair of eyes, and users are encouraged to decorate their AVl, to personalise it and give it a name. After all, it’s effectively their avatar, a kind of proxy when they can’t get to school.

AV1 is designed to sit on the desk where the student normally sits. It’s equipped with a two-way audio and one-way video feed that both operate over a 4G connection or via the school’s wifi network.

An app on the user’s tablet or smartphone allows them to see and hear whatever is going on in the classroom and join in, either talking to the whole class – perhaps when answering the teacher’s questions – or just the person sitting beside them using a low-volume ‘whisper’ mode.

Built-in motors allow the AV1 to turn through 360° and raise/lower the head up and down through 40° in order to follow what’s going on.

Other features include a rippling effect on the head that signifies the user putting their hand up, and a blue light to show that although the learner is connected, they don’t feel up to joining in that day.

(The idea behind the one-way video, incidentally, is that the user can’t be seen, but still has full access to the classroom. That way, they can be in bed wearing their pyjamas or wherever happens to be best for them, without having to share any discomfort, their physical appearance or other issues relating to their treatment with the rest of the class.)

Understandably, some staff have raised concerns about the AV1 making them feel is if they’re under scrutiny. All teachers are sensitive to observation, and conscious of the judgments it can lead to, which is why the AV1 includes a number of features intended to allay such concerns.

Recording of its audiovisual feeds is disabled, and if anyone tries grabbing a screenshot, the device will immediately shut down and the user will be required to obtain a new ‘sign in’ keyword from No Isolation tech support. Just like the lesson itself, everything happens in real-time only.

Another key feature is the banking industry-level of security. Each AV1 user has a unique keyword that gets changed every time the device is passed on, as it likely will be.

No Isolation estimate that there are over 70,000 children and young people in the United Kingdom with long-term medical conditions, eight out of 10 of whom will fully recover. The AV1 is therefore largely intended to play its role for a limited time before moving on.

The company calculates that every school in the country is likely to have use for an AV1 at some point, particularly among pupils with intermittent illnesses whose absences will be unpredictable and challenging to plan around.

When schools know how long learners will be away for, it’s easier to plan work for them, organise home visits and load the school’s learning platform with appropriate activities. Unexpected absences can be particularly disruptive.

If a parent phones in of a morning to report an absence and an AV1 is available, it can be promptly unplugged from its charger and put to use.

A TA may then proceed to move it from room to room depending on the learner’s agreed timetable – often one specifically planned around what they can cope with – but it could just as easily be stewarded by a classmate who’ll also be able to take it outside at lunch, allowing the user to remotely socialise with friends and keep up with the latest gossip.

After all, that’s one of the key intentions behind the whole initiative – preventing social isolation.

The number of AV1 users is steadily growing, ranging from a five-year-old in Scotland to first-time mothers researching the human genome in Cambridge. The system isn’t particularly cheap, though, costing £280 per month to rent or around £2,200 to buy, plus an additional £55 monthly service charge.

That does include insurance to cover up to two replacements, however, and a 4G connection that can be online at all times, representing a hefty chunk of data.

Long-term illness can often disrupt relationships. If you don’t get to talk face-to-face with a particular person for weeks on end, your sense of that person may gradually fade.

With this device standing in, not only is it easier to bear an absent pupil in mind, it’s also easier for them to settle back into the classroom once they’re able to attend again – since really, they’ll have never fully left.

Well Schools – A practical guide to measuring wellbeing in schools

Well Schools, with support from the Youth Sport Trust and the BUPA Foundation, recently launched a guide that aims to demystify the process of measuring wellbeing and provide some practical...

A 4-page guidance document on how teachers can utilise critical literacy.

What does it mean to interpret a text critically? It means being a discerning reader who does the following: questions...

The reality of true wellbeing is that it's different for all of us, says Vicki Manning...

Tales of the great outdoors and all it has to offer can help pupils understand...

Unleash pupils’ potential through the mighty morphin' power of language and get a class full of...

Primary maths – how to answer the question ‘Why are we doing this?’

Mike Askew, Professor of mathematics education at the University of the Witwatersrand, Johannesburg

From appreciating art to the joy of solving puzzles, Mike Askew explores the true purpose... 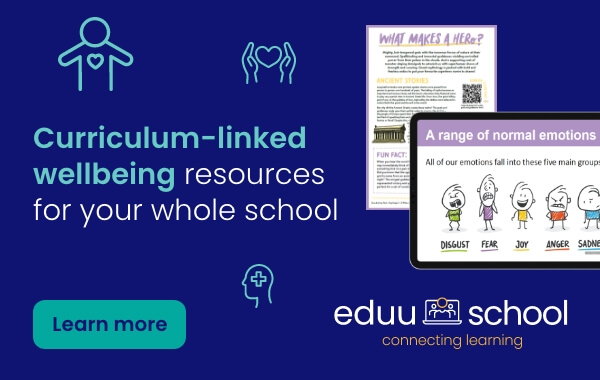