Creative writing – How to write the world’s most boring story

Are your pupils struggling to produce exciting writing? If so, Chris Wakling’s tongue-in-cheek advice could be just what they don’t need...

First, some good news: you can head off your chances of writing a good adventure story well before you put pen to paper at all.

For starters, don’t read any adventure stories, and if you do, don’t slow down to think about how the story is structured, or what’s motivating the characters, driving
the action, building to the climax, knitting together in the ending, etc.

Next, don’t practise. Writing just comes when you’re inspired, right? So no need to write lots and lots of words, experimenting with voices and ideas.

Don’t plan either. Much better to spear in and see where the muse leads you. Just start! But how?

Disembodied thinking is always a winner. Have somebody vague thinking about what happened before the story, which hasn’t started yet, started. Possibly they could be staring out of a window.

Don’t get the reader wondering about stuff, not ‘What’s in her pocket?’ or ‘Who is he running from?’ Whatever you do, avoid creating that dreaded sense of ‘What’s going to happen next?’… otherwise readers might turn the page to find out.

Instead, consider weather. Rain works best. Veils of it. Start with your hero looking out of a window at the rain falling… on a roof. A slate roof. Possibly the sky could be the colour of a fading bruise. Spend a paragraph or so finding out. Readers love that stuff.

Definitely don’t start with a character doing something interesting, possibly with a problem to solve, in a dramatic location.

And don’t up the stakes for them. Don’t give them a break only to take it away, putting them somewhere worse. That way lies disaster: you might accidentally create a sense of escalating action, with more and more at stake.

On characters: keep them superficial. Clichés work best. Hitmen should have shaved heads, scars and no conscience, obviously. And don’t worry about whether your main characters are likeable, funny, relatable, or even interesting; who cares?!

The more minor characters the merrier. Why have one sidekick when you can have six? All with similar names. Just stick ‘em all in any scene you like; the reader will work it out.

I nearly forgot dialogue. Obviously don’t have too much of it. Readers switch off when characters actually interact with one another. Go for long passages of description, with not much happening, instead.

If you accidentally make something happen use the phrases ‘Started to’ and ‘Began to’ before it does. ‘He began to stand up.’ ‘She started to smile.’ And if the action is really important let the reader know it’s coming by saying ‘And then it happened’ before it happens.

Chuck in a ‘suddenly’ too. ‘And then, quite suddenly and without warning, it began to happen.’ Boom!

A word on suspense and mystery. Kill these off quickly. If by accident you’ve raised a question or put a character in a difficult situation, give away the answer and get that character to safety really quickly: in the next chapter, or paragraph, or – if you can – the next line.

Even little questions, left unanswered, can power whole stories if you’re not careful.

Next, landscape. Have lots, lovingly described, as in described at tremendous length. Don’t be too specific. Say ‘car’ instead of ‘Mustang’, for example, and drive that car down ‘the next road’ instead of naming an actual street.

Don’t make the mistake of varying where the action takes place. If you can, stick it all in one office, or a single garden, which you can describe again and again.

Back to dialogue. If you must have it, make the characters say exactly what they mean, repeatedly, regardless of whether the person they’re speaking too already knows what they’re saying.

‘You’re my brother, I’ve always looked up to you,’ said Pete. ‘I know, little bro, we’re family. And I’ll protect you. I always have and I always will, ever since you were first born,’ replied Rob.

Another subtle area to work on is logic and coherence, both at plot and sentence level. By ‘work on’ I obviously mean ‘totally ignore’. So long as you don’t know why you’ve dropped a brand new character in just as the story is ending, go for it.

You had a good reason to write, ‘It was a torpid day in the tropics. Sweat plastered my hair to my brow, while a cool breeze fluttered around my ankles…’ – anybody arguing you’ve contradicted yourself can go hang.

And let narrative convenience be! If you need a trapdoor in a scene have one character say ‘If only there were a trapdoor,’ and then have the other pull a branch or something, revealing a trapdoor neither knew about. Just make the first character say something like ‘What luck!’ and the reader will never notice.

Don’t worry, the end is in sight. It has to be. There’s just the small matter of wrapping things up before the final full stop.

Now you may have ignored my advice and accidentally seeded your story with questions. Readers are very shallow and have been known to like a few answers before you sign off. Don’t give in to them.

Keep things really open. Almost as open as if you’d forgotten the story ever posed the question, or remembered the question but couldn’t come up with a satisfying response.

Who killed Dave? Who cares! Does Jamal escape? Maybe! Ambiguity is sophisticated. It also leaves room for a sequel. Bonus.

If your adventure story is a quest, end before the final destination; if it’s about a rescue, drift off and talk about someone else’s backstory, and if all else fails just have the galaxy explode because of some previously unmentioned threat: job done!

Except it isn’t, because you have to do some editing. Kidding! Do not get cold feet and go through your story doing the opposite of everything I’ve advised.

Don’t check it structurally, interrogating each scene, each character, each setting, every beat, motive, every escalating moment, asking what each and every component is for.

And finally, don’t try to improve your sentences. There’s no need: the muse gave them to you perfectly formed. Forget proofreading. Nobody cares about a few typos. They won’t pull the ruder out o f the action at awl!

Chris Wakling is the co-author, with Wilbur Smith, of Cloudburst (Piccadilly Press), the first title in a trilogy for children aged 9+, starring 14-year-old Jack Courtney. 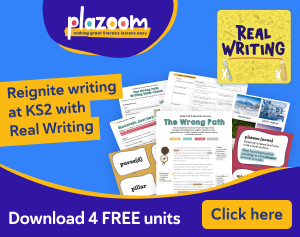 A school’s English department will be the first line of response when it comes to raising...

Concerns over ‘lockdown illiteracy’ serve to conceal systemic issues with reading in schools that stretch back...

Zoe Enser, Specialist advisor for English at The Education People

Zoe Enser unpacks the power that a teacher-led, tutor time reading programme can have...