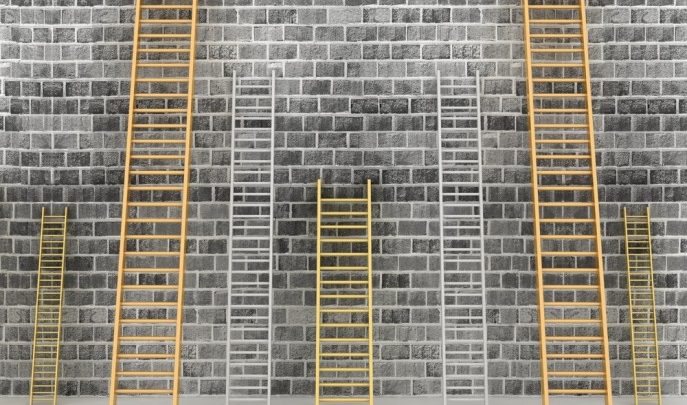 Ladders leaning against walls is a classic scenario for mathematics problems and is often used to address topics such as Pythagoras’ theorem and trigonometry. In this lesson, the situation of two crossing ladders is used as an opportunity to work on ideas relating to similar triangles. How high will the crossing point be above the ground and how far will it be from each wall? What happens for different lengths of ladders? What happens if the walls are further apart or closer together?

Students need to identify triangles that are similar and then construct equal ratios to work out their answers. They will notice interesting properties, such as the fact that the distance between the walls does not affect the height of the crossing point. There are also connections with an average called the harmonic mean.

Q. Imagine that a ladder is leaning against a wall across an alley between two tall buildings. The buildings are 3 metres apart and the ladder reaches 6 metres up the wall.

Q. Would you be able to walk down the middle of the alley without bumping your head on the ladder? Give students a few minutes to discuss this in pairs. They will probably realise that in the middle of the alley the ladder will be half of 6m (ie 3m) above the ground, so they should be able to fit easily underneath. They might not interpret ‘middle’ as exactly in the middle. They might also worry about the width of their head or its vertical motion as they walk along.

Students could repeat the calculation for animals of different heights:

Q. Have we made any assumptions in working this out? There are lots of things that students could mention. For example, we have assumed horizontal ground and vertical walls, we have ignored the thickness (and any bending) of the ladder. We have also ignored the fact that the duck might ‘duck’ as it goes under the ladder (and so might the other animals)! We have ignored the width of the animal and any vertical movement as the animal walks along.

Q. Now there is another ladder leaning the other way as well. This one is a shorter ladder and only comes 3 metres up the left-hand wall. Work out whether you would be able to walk underneath the two ladders without ducking.

This is quite a hard problem, so give students time to think about it and make some sketches. Some students might want to make an accurate scale drawing so that they can measure off the height from the ground where the ladders cross. This could be useful as a starting point, to get a feel for the problem, but eventually it would be good to encourage everyone to try to calculate from a sketch using similar triangles.

It is helpful to mark on the horizontal distances to the crossing point (a and b below).

Since the walls are parallel, pairs of alternate and vertically opposite angles reveal that the two blue triangles shaded above are similar. So the ratios of corresponding lengths are the same:

Now we can focus on right-angled triangles and see that for the short ladder the red line must be the same length as a (because the gradient of the short ladder is –1), meaning that the height of the crossing point above the ground is 3 – 1 = 2 metres.

Students will be able to find other similar triangles, and may find it easier to mark the lengths a and b along the ground rather than in the air.

Alternatively, students could represent the problem using equations of straight lines. Taking the bottom left corner as the origin and 1 metre as the unit, the two ladders could be represented by the line segments:

If students know about simultaneous equations (or even if they don’t), they might be able to solve these by writing 2x = 3 – x, and obtaining x = 1, y = 2. Or they might spot this solution by inspection, as the numbers are simple.

Students who know about trigonometry might think of using that and finding the angles between the ladders and the horizontal/vertical. This could be good practice with trigonometry, but is not the most elegant approach.

Students who get an answer quickly could be challenged with:

Q. What would happen if the width of the alley were 4 m instead of 3 m? Students may be surprised that this makes no difference to the height at which the ladders cross, which is independent of the width of the alley. Students could imagine squeezing the walls together and seeing the angles of the ladders changing but the crossing point staying at the same height above the ground.

A more challenging problem would be to generalise by representing the 3m and 6m vertical distances as p and q.

A related task would be to create a problem that makes the crossing point at exactly 1.5m or at exactly the student’s height, whatever that is. Generating their own crossed ladder problems, with ‘nice’ answers, and solving each their friends’ can be useful.

You could conclude the lesson with a plenary in which the students talk about their solutions and how they got them.

Q. What did you work out? How did you do it? Can you show us what you did and how you know that your answer is right? What was difficult? Did you make any mistakes that you had to correct? What problems did you make up? What did you find out about these sorts of crossed ladder problems?

The general situation is shown below.

There are many ways to derive the general result and it is possible to go round in circles fiddling with the ratios if you are not careful!

From similar triangles around the short ladder, we can see that:

And from the long ladder we can see that:

Adding these expressions for a and b must give us d, so:

And dividing through by dh gives us the neat result:

(Students may find this reminiscent of the physics formula for resistors in parallel, or capacitors in series, and there are other applications in other areas of physics.) The fact that d cancels out shows us that the width of the alley doesn’t affect the height of the crossing point.

Some harder ladder problems, and their solutions, are available at mathematische-basteleien.de.

Colin Foster is an Assistant Professor in mathematics education in the School of Education at the University of Nottingham. He has written many books and articles for mathematics teachers (see foster77.co.uk).