Science at the Seaside

Set sail on a journey in which driftwood and shells become shipwrecks and sea monsters. All you need is imagination...

Coastal schools haven’t been portrayed in the best light recently. You’d be forgiven for thinking that until Nicky Morgan started parachuting inner-city teachers in, they were simply being left to erode into the sea. Things aren’t that bad, of course, and the one thing that coastal schools will always have is, by definition, the coast.

The Science at the Seaside project in Devon was created to revive interest in the natural history of the county’s coastlines, which were the subject of great 19th-century literary and scientific writing by figures such as George Eliot and Philip Gosse.

“We had 17 schools in our first year, with an additional 12 joining in the second,” says primary investigator, Dr Kyriaki Hadjiafxendi. “This interest was largely because the teachers felt there was a need for developing outdoor learning provision. So, while it started as a scientific project, we adapted it to fit in with the schools’ themes. The majority wanting a literacy focus, for example, so we started offering creative writing workshops.”

Kyriaki and co-investigator Professor John Blunkett worked with their respective universities – Bath Spa and Exeter – as well local groups and organisations including Ilfracombe Museum, the Museum of Barnstable and North Devon Fisheries Local Action Group (FLAG) among others, to bring this project to over 1,400 pupils.

“Many of the teachers would take the children on a field trip first. Then we would run a workshop with them, adapted to suit that trip,” says Kyriaki. “Children would bring in photos of objects they found on the beach, or that they had at home, related to their trip. That would give them the opportunity to think about their experiences and how they relate to the coastal environment.

“Then, in the second part of the workshop, we worked with artefacts from Ilfracombe Museum or the Royal Albert Memorial Museum in Exeter, and we would take in some of Philip Gosse’s illustrations of the creatures and sea life he encountered during his trips to North Devon. We tried to teach them about environmental tourism, and about the beginning of natural history in the Victorian period, because that’s how natural history came into being – that’s how museums came into being. In the final part, workshop leaders would read out short poems or passages of fiction, and children would then write their own story or poem.”

At Littleham Church of England School, part-time literacy teacher Georgina Cambridge saw this as a great opportunity. “The aspect of the project that excited me was the found objects on the beach,” she says. “Our workshop leader, Tamara, and I brought some in for the children to touch and explore. We looked at the story of these objects, getting the children to become them – thinking about from where it might have travelled, and what it has seen on its journey.”

Each child picked a different object: there was part of a boat, part of a propeller, a sea sponge, a cockle shell and various pieces of wood. “They all researched their object to inform their stories,” says Georgina. “They started getting really excited by different things, which was lovely. One girl had a scallop shell, so when researching she found Botticelli’s painting, The Birth of Venus. Her whole story then became that her shell was the one painted by Botticelli.

“Another girl had a very unusual piece of wood, so she tried to find out what is was and where it might have come from. She found that is was the type of wood used in a paddle steamer called The Beaver – whether she was right or wrong didn’t really matter. She wrote her story about how her piece was part of that steamer, and that it had been broken up in a shipwreck. Everyone wrote about whatever piqued their interest, and we looked at maps of where their objects might have travelled in the water. It became very fascinating.”

“One child didn’t like touching dirty things found on the beach,” says Georgina. “He picked the cleanest, newest little piece of wood he could find. Even then, he wasn’t keen on becoming that piece of wood, so we worked very hard with him to try to come up with things that that piece of wood might have been part of. He was adamant that he didn’t want it to be dirty or anything like that. We showed him lots of different pictures and one was of The Maldives and those lovely huts that sit out in the water. He was mesmerised. Suddenly he was transported into his piece of wood and being part of one of those buildings.”

The workshops were run by four PhD students, who helped cater the learning to each school’s needs, whether it was a one-off session, or a number of sessions spread out over a few weeks. “We trained them up, and developed that training with the feedback from the schools,” says John. “So there’s a real benefit for them in terms of professional development, and how to communicate their ideas to different audiences. And we’ve taken feedback from them as well. It’s great seeing how much they’ve enjoy it, and how much they love the enthusiasm of the primary school students.”

At the end of the project, pupils were invited to submit their written work into a competition for Years 3, 4 and a combined one for Years 5 and 6. “The PhD students would go to each school to hand out prizes for the winners, and certificates for everyone who entered,” says John. “We had about 350 entrants, so that’s something we hope to repeat again this year so that there’s something tangible at the end.”

While we tend to think of the seaside as ice-creams, amusement arcades and piers, there’s a whole chapter of history before that of interest in the coast that Kyriaki and John are trying to recover and get out to schools.

“We felt that primary school children could respond to that fascination with walking along the beach collecting things and seeing what you can find – having a hands-on experience,” says John.

“And there are quite a few parallels between that and the 19th century. Science wasn’t yet professionalised; it was still the world of the amateur, the curious, the people making fascinating discoveries. Obviously it’s a lot easier for coastal schools to incorporate trips, but a passion for natural history and the outdoor world, and finding out about your own environment, that’s something that’s transferable, and something we hope to roll out to schools across the country.”

1. A walk to remember 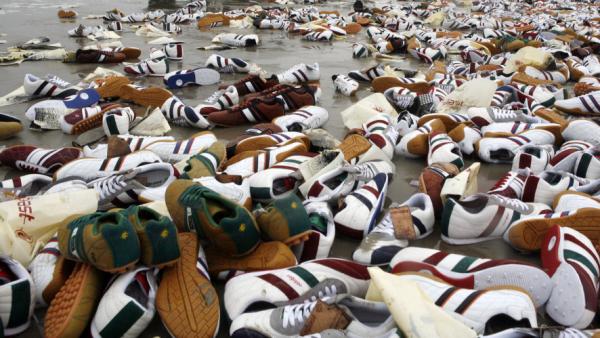 A perfect storm of winds, currents and shipping routes mean that the beaches in Terschelling, Netherlands sees all manner of items arrive on shores every day. In 2006, half a million shoes appeared, followed a year later by an abundance of bananas.

Since 1997, the contents of a shipping container – almost 5m pieces of Lego – have been washing up on Devon and Cornwall coasts. There’s even a Facebook page where people post their finds.

A teenager on holiday in Cornwall was using a piece of driftwood as a cricket bat, until it turned out to be a human femur bone. The right femur, pelvis and part of the lower spine were later found in the same place, thought to be those of a 300-year-old shipwrecked sailor.