Meet The Baptist Minister Who Wants To Tackle Extremism With Radicalisation 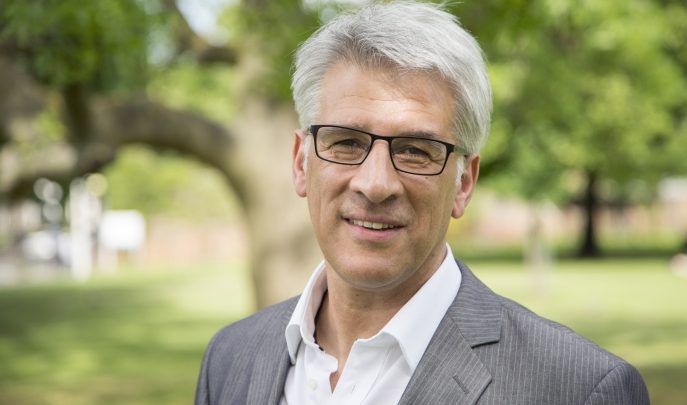 Could the best way to tackle extremism’s appeal to young people be to employ the same radicalisation tactics for different ends? Oasis founder Rev. Steve Chalke believes it is… Rev. Steve Chalke is a Baptist minister and the founder and global leader of Oasis – a global provider of education, housing, healthcare and youth work […]

Could the best way to tackle extremism’s appeal to young people be to employ the same radicalisation tactics for different ends? Oasis founder Rev. Steve Chalke believes it is…

Rev. Steve Chalke is a Baptist minister and the founder and global leader of Oasis – a global provider of education, housing, healthcare and youth work with a Christian ethos.

This month sees the publication of his book Radical – Exploring The Rise of Radicalism and the Pathway To Peace, in which he argues that the way to combat terrorism and extremism is through providing young people a different narrative – and employing recruitment tactics similar to those of extremist causes in order to do so.

Here, he tells us about Oasis’ plans to ‘radicalise’ young people, why current counter-extremist strategies are failing – and what he believes the British Army and Isis have in common…

You’ve previously stated that it’s important to articulate ‘A deeper and more powerful sense of purpose, identity, meaning and belonging for vulnerable young people.” Can you unpack this? What do you mean by ‘identity’ and ‘purpose’ in this context? There’s been a huge amount of research done into why and how people are drawn into extremism and gangs, and it amounts to the same thing. People join gangs and Isis – which is itself is a big and brutal gang – looking for belonging, a sense of identity, a voice. They’re seeking community and family.

People have studied terrorism for centuries, and the truth is that those factors have always driven recruitment for terrorist causes. Young people are being drawn into a twisted, warped story of life that offers them a false sense of hope and belonging. The best way to counter that is with a story that’s worth belonging to.

What are you your thoughts on radicalisation in schools is currently being tackled, and how effective would you say those efforts are? The Prevent programme is good thing, so far as it goes – having schools watch for and spot the symptoms and signs that someone might be, or is being radicalised.

What we’re saying is that this is a responsibility that schools and universities should have – but also that as a society, we need to deal with the roots of the issue, before it gets to the stage where teachers pick up on kids spending time on extremist websites. Wouldn’t it be wonderful if we could prevent that situation from ever happening?

You also suggested that schools should foster ‘social revolutionaries’ – can you give any examples from Oasis’ own academy schools as to what this involves? There’s a young man at one of our schools in Immingham, for example, who’s taken on responsibility for a huge piece of land in front of the school. As a student, he contacted the local council and other schools and persuaded them to join him in helping secure planning permission for a Peace Garden, which is now in the process of being built in the heart of Immingham town centre.

He was able to transform a piece of land that wasn’t being used into a place that will become a landmark for the town, help build relationships and create a story of unity. That’s what I mean by ‘social revolutionaries.’

The main argument you put forward in your book is that ‘radicalisation’ isn’t necessarily a problem in and of itself, but rather the ‘identity and story’ into which people are radicalised. Who gets to decide what a ‘good’ identity and story is, or should be? No one gets to decide what these stories are – lots of them already exist within society. Young people are idealistic, and two things happen to that idealism. It’s either crushed, with all the imagination and creativity drained out of their lives, leaving them to just plod through life – or their idealism gets caught up in a big story.

The research and our experience says that we can’t live outside of a story. We need a metanarrative – a story we believe in that helps us makes sense of our lives.If you become part of a postcode gang, for example, you’ve bought into a shared story that you’re against other gangs, that you all carry knives to defend yourselves and that you’ll sometimes use them.

I had the privilege of being radicalised into a much better story. I grew up in South London, and at the age of 14 I started going to a youth club. It wasn’t government-funded or set up by a school, but run by a church, as it happens – and I went there not because I was ordered to, but because I heard there was a girl there I fancied, that was it.

There, I met a bunch of exciting people that I wanted to be like. I was impressionable and idealistic, I wanted my life to count for something and for it to matter. These guys seemed much older than me, and passionately concerned about creating justice in the local community. It was through going to this club that I decided I wanted to one day set up a school that was worth going to, a house where teenagers could live if they’d been let down or abused by their parents or guardians and healthcare for vulnerable people.

I told the guys running the youth group what I wanted to do, and instead of laughing they sat and listened to the idea and said it was brilliant. I was radicalised into that idea – and that was when my school life took off in a way it hadn’t before, because I now had a reason for learning.

How would you define ‘bad’ or ‘negative’ radicalisation? Society has been naming issues for a long time, but identifying specific issues such as alcohol or casual sex won’t stop young people from drinking on a Friday night, or casual sex from happening.

We’ve got to work out how we’re going to turn the tide and prevent these situations. It strikes me that if you fill a young person’s Friday night with something more productive than standing around in a park with a can of beer, and use that time to engage their creativity in art, music or whatever it might be – and inspire them about what their lives could be about – you’re going to get a lot further.

Our current counter-extremism solutions fail to connect young people’s lack of a sense of belonging, and their need for a sense of purpose and meaning and having a voice. Instead of tackling the roots of the issue, they end up attempting to deal with the symptoms of its growth. They’re not radical enough. We’ve got to dig deeper, be more radical and deal with the fundamentals of the issue – which is that kids aren’t engaged.

We have to give people a better narrative – a story that’s more compelling, deeper and more challenging, more thoughtful and more productive. And more rooted.

You argue in the book that the ‘British Army are using recruitment tactics not dissimilar to ISIS’. Could you elaborate on that? I’m not saying anything negative about the Army’s advertising, but if you look the websites of our Army and others, it’s explicit. They talk about joining the Army as not being just a job, but like joining a ‘family’. You don’t get colleagues, you get ‘friends’. You’re given a sense of purpose.

It’s a good thing to say, because that’s exactly what the Army does for people. All I’m saying is that Isis and many other groups tend to trade on the same thing. They spot that young people are looking for a sense of belonging and purpose and give it to them – or at least promise it to them. And young people fall for it.

What we should be doing is creating great stories in society and saying ‘You’re included’. We have a society in which endless numbers of young people feel disenfranchised, powerless and unheard.

This sprint sees the launch of the Oasis Foundation’s INSPIRE initiative – a ‘peacemaking programme’ that seeks to engage schools and educators with embedding principals of purpose, peace and identity into the curriculum.