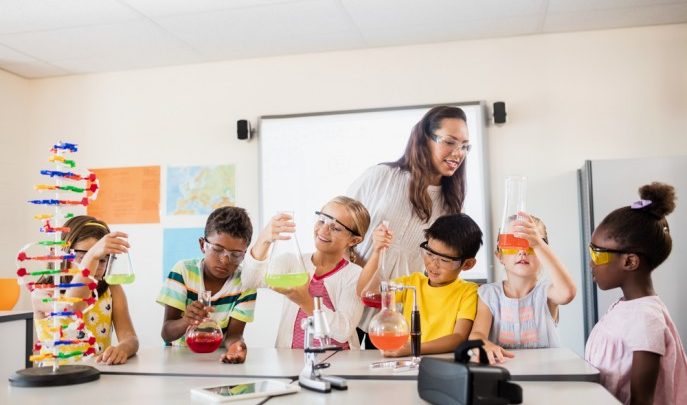 “I used to want to be a beautician, but now I want to be a scientist.” My ears prick up. “Probably a biochemist. Maybe a paleontologist.” Courtney is a Year 4 pupil confidently responding to questions from a visiting education researcher.

I’m sat at the other end of the room while she and a group of peers are being interviewed.

A little under three years ago I spotted a job description written by the children of Gillespie Primary School. It was a classic double-take moment – I had to carefully reread to make sure I hadn’t imagined it:

You will need: patience, wild sticky-up hair (not essential, we can sort that out for you when you arrive) and a long white lab coat with iridescent stains on it (essential).

Qualifications: A degree in science, a sprinkle of creativity, a pinch of enthusiasm, a well of curiosity, experience working with children (don’t worry, we don’t bite!) and…the power to inspire!

I visited the school, made a mess during the interview lesson (literally – with cornflour and water) and left my job as a secondary head of physics in Hackney to become Gillespie’s first scientist/inventor in residence.

One of the greatest opportunities this role affords is the ability to develop children’s ‘science capital’ – a term used by a team of researchers at King’s College London to describe the sum of a person’s scientific experience. It’s an idea that’s been explored as part of the ASPIRES project, which has tracked the opinions of 19,000 pupils along their journeys from upper primary to the end of secondary in order to understand why some choose to become scientists – and why most don’t.

What did they discover? Teachers across the land should congratulate themselves: most pupils aged 10-14 enjoy doing science, with over 70 per cent finding it interesting. But far fewer (only 15 per cent) actually aspire to be a scientist.

The ASPIRES team call this the ‘being/doing divide’. Their research suggests that the current crisis in STEM recruitment is not because pupils don’t find science fun or interesting, but because they lack a wide enough range of “knowledge, experiences, attitudes, behaviours and practices” related to science in their lives. They lack the science capital to believe, fundamentally, that someone like them could become a scientist.

So, what does make a difference to pupils’ aspirations? Knowing a scientist personally massively increases the likelihood that a young person will want to become one themselves, as does time spent reading books or watching TV shows about the subject, visiting science museums and participating in extracurricular science activities or clubs.

The groups of pupils least likely to have high science capital are girls, pupils from lower socio-economic backgrounds, and black pupils – making this a social justice issue. The reasons are complex and multidimensional, and there’s no one solution to addressing these inequalities. However, there are things that we as teachers can do.

Back to Courtney in Year 4. Statistically, she is likely to have poor science capital – she is a girl from a low socio-economic background – so what changed her mind? Why does she now aspire to be a scientist, rather than a beautician?

During the past year, Courtney attended STEAM club (STEM + Art), where she worked in a team to invent and build a product that would be helpful to another person. She participated in assemblies, projects and competitions organised by our management committee of Y5s and Y6s – our school’s scientific role models. She brought her family to our Science Spectacular – a yearly event planned by the management committee to celebrate the subject, hosted by children, with grown-up and child scientists sharing their research and learning.

Courtney learnt what a paleontologist is when she met ‘fossil hunter’ Lottie (a doll designed to be a positive role model) in lessons, and later a range of real-life scientists and engineers who enthusiastically answered her questions about their jobs. She threw herself into small-group investigations answering questions about science, some written by her fellow students – and some by Courtney herself.

Everything about my role as scientist / inventor in residence develops the children’s science capital. Courtney is immersed in a school culture that values science immensely.

Test for the future

ASPIRES highlights that children begin to form their science identity (their belief about whether science is for them, and whether they could become a scientist) while in primary school, and that this rarely changes during their secondary education (research from the Institute of Physics has found that, despite millions of pounds spent on secondary science interventions, the proportion of girls studying physics at A-Level remains stubbornly low, at just over 20 per cent).

As primary teachers, we have the great fortune of being in a position to shape the way our young pupils see themselves. Together we can ensure that neither background nor gender are barriers to children believing that science is ‘for them’.

1. Feature examples of different types of scientists in lessons: when learning about the rock cycle, refer to geologists (who study rocks) and paleontologists (who study fossils). Our ‘fossil hunter’ doll, Lottie, is loved by the children, and helps inspire them during investigations and lessons.

2. Make cross-curricular links to science, so that pupils see that it’s everywhere. The Royal Society of Chemistry has a brilliant set of free online resources to help with this.

3. Invite scientists to visit your school, speak in assembly or hold a Q&A during a relevant topic – the STEM Ambassadors website is a way to get hold of scientists and engineers.

4. Set up a science committee – a group of children who organise science events, run competitions and share science news in assembly.

5. Set up a science / STEM / STEAM club. I give pupils experiment cards to take home at the end so that they can share what they did with their family. There are countless online resources to help plan clubs – one of the best is the BSA Crest Star.

6. Hold special events, assemblies and lessons during British Science Week in March (or any other more convenient time). Again, the BSA offer plenty of ideas and resources to help with this, as well as funding opportunities.

7. Take part in the Primary Science Quality Mark, or get involved in an Ogden Trust Primary Partnership (which I help run) to become part of a local primary science hub and access valuable resources / CPD for free.

Carole Kenrick is scientist / inventor in Residence at Gillespie Primary School, and works part-time for the Ogden Trust supporting primary schools to set up Ogden Primary Partnerships. To find out more about how to get support from the trust email carole.kenrick@ogdentrust.com.