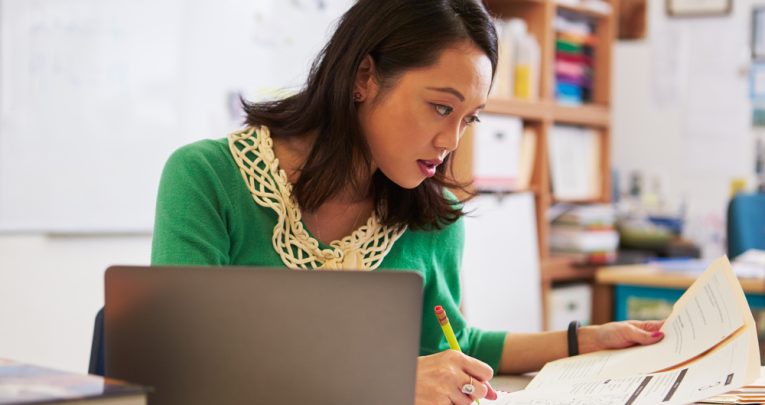 We know teachers are spending too much time on marking, says the EEF, but are yet to establish what strategies work best

According to a new report published by the Education Endowment Foundation (EEF), there’s currently little evidence for what marking strategies are the most effective – despite teachers devoting a substantial, and arguably ‘excessive’ portion of their working week to dealing with marking demands. The EEF now hopes to fill the gap, having announced a £2 million research fund for projects aimed at finding out what works and what doesn’t.

The report, titled ‘A Marked Improvement’, saw researchers from the University of Oxford’s Department of Education carry out a review of existing research in the area, only to find that, ‘Few large-scale, robust studies, such as randomised controlled trials, have looked at marking.’

Instead, the team found that where studies had been carried out were either small in scale, or else focused on marking within EFL teaching and higher education, with the resulting findings difficult to apply to a secondary or primary school context.

From the evidence they were able to uncover, they found that teachers could potentially develop a more effective marking strategy by doing the following:

• Distinguishing ‘careless mistakes’ from errors caused by misunderstanding, and marking them differently – the latter by adding hints or questions that point to the question’s underlying principles, and the former by simply marking them as incorrect without providing the correct answer. • Adopting a general policy of ‘Mark less, but mark better’; the time spent acknowledging that work has been seen, for example, could instead be spent providing specific information about how to improve, even if it means fewer pieces of work are marked overall • Setting aside time in which pupils are able to properly consider and respond to feedback • Carefully balancing the time required versus benefits of using targets to make marking more specific

A national survey of 1,382 teachers commissioned by the EEF to accompany the report asked respondents about 10 different marking strategies. Writing targets for improvement emerged as the most commonly used, with 72% employing the strategy on most or all of the work they marked. The more traditional process of marking, identifying and correcting errors also appeared to still be commonplace, used by 72% on most of the work they marked.

Earlier this year, a survey of teachers carried out by the Independent Teacher Workload Review Group [PDF] found that 53% felt ‘The excessive nature, depth and frequency of marking was burdensome,’ going on to note that, ‘Marking has evolved into an unhelpful burden for teachers, when the time it takes is not repaid in positive impact on pupils’ progress. This is frequently because it is serving a different purpose such as demonstrating teacher performance or to satisfy the requirements of other, mainly adult, audiences.’

It’s in this context that the EEF’s report talks of ‘An urgent need for more research into the most effective marking strategies’ – and it’s prepared to invest in order to make that happen. Alongside the publication of the report, the EEF has called on researchers to partner with schools, and announced that it has earmarked £2 million of funding for new trials aimed at producing practical evidence of what marking systems and strategies work, which can inform current teaching practice.

According to EEF chief executive Sir Kevan Collins, “Today’s report should be a real wake-up call for policymakers and school leaders. Why are we asking our teachers to spend hours and hours each week on time-consuming marking strategies, when there is very little evidence to tell us which of these have any impact on pupil attainment?

“Instead of looking to ideological debates to find a solution, we need to be guided by robust research. This is why we’ve committed £2m to fund research to find out what the most time-effective marking strategies are.”