Algebra should be doing more for your students than inducing bafflement 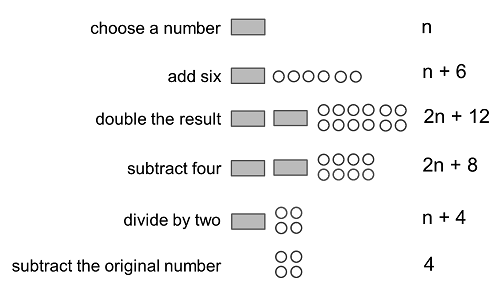 Algebra is important, and has a big role to play regardless of what some pupils and parents might think about it

Algebra has a bad reputation – a reputation for being demanding, arcane and often unforgiving.

But it has a harsh press: reviled by parents and other adults as a pointless and pedantic game played with letters, it is spurned because of its abstraction and cloaked sense.

Deepening this demise, there are endless classroom drills that can, and do, smother any semblance of interest – simplifying by collecting like terms, multiplying out brackets and introducing them – with no apparent lure or end.

It can certainly be a step too far for many students, especially evident in school examinations.

This student gets one mark for their algebraic abuse,
because the answer is correct!

So what hope is there for algebra teaching and those many teachers who view it as a pinnacle if not the obelisk of school maths teaching?

History can help. The Ancients developed particular routines that we would now call ‘algebraic’ through (we assume) the use of diagrams, with general statements located in a self-evident basis.

They became proficient in techniques, for example solving quadratic equations beyond the practical ‘area of land’ considerations that spawned them. Recording their approaches involved writing out their methods using words, with no symbolic simplifications available. Diagrams created insights.

The heritage of various cultures can suggest ways to lend initial meaning to expressions such as xy (as a rectangle, possibly with a fixed area eg of 12 cm2, exploring a reciprocal function) or n2 – 1 which can be viewed as a square with a small bite taken out of it (that can then be reconfigured).

Such associations, although limited, can be helpfully recalled and developed in new work, for example, when multiplying out brackets.

Algebra can helpfully build from words and diagrams and be used to explain and succinctly convey already appreciated results:

In order to entertain a sense of mathematical beauty, satisfying intrigue and acknowledging the structure of a fully rational argument (arguably only found in pristine form in this subject), there is a need to be sure-footed in algebraic skills.

By improving and honing this facility, students can introduce and use symbols, increasing the complexity and range of problems they can solve, eg:

The angles in a triangle are to be drawn in the ratio of three consecutive numbers, eg 2 : 3 : 4
• What are the angles for several such ratios?
• What do they have in common?
• Why?

Algebra can help people to think logically – freeing them from particulars to work on generalisations. An appreciation of rigour in mathematics emerges from algebraic (and geometric) certitude, salient to any maths curriculum that purports to demonstrate the nature of the subject to students by identifying and then seeking explanations to connections.

So, in much early school algebra work, a fitting concern might be that students can layer algebra onto the structure offered by diagrams, acquiring skills that relate to a situation eg linking a solution to a problem to creating and ascertaining solution steps in an equation:

Confident students will be able to marshal algebraic skills to believe, with good reasons, that some things are always true. An ability to grasp abstract concepts helps students to learn how to think in new and possibly constructive ways, stimulating the brain as well as being a source of personal satisfaction. Building such confidence requires starting early and, in my view, accompanying routines with a diagram or using manipulatives (initially at least) – wherever possible.

It seems helpful for algebra work, where possible, to involve:

i) a numerical result: a perceived pattern or general relationship derived from a range of numbers, i.e. by specialising. ii) algebra to be layered over this (icing on a cake), to summarise the (discovered) pattern and possibly justify it. iii) a diagrammatic form created to lend further insight into generalities and proof.

In this way the three lightings conjoin to reinforce a clearer understanding of a generality and this has the benefit of connecting algebra to a generating task, as a root.

As an example of how this could be invoked: working with numbers, students could be asked to explore the difference between square numbers and the next but one square number. They can identify and test a clear numerical relation that the result always seems to result in a multiple of 4. Further, they can find that this is 4 × the number between the two numbers that were squared. Algebraically, the result is explained and proved by considering either (n + 2)2 – n2 or n2 – (n – 2)2. Diagrammatically, one square can be placed inside another to illustrate that the remaining area is 4 lots of a rectangle.

It can be interesting to vary the order of presentation of these three lightings:

• Sometimes starting with a diagram as in growing ‘matchstick’ patterns, leading to nth term generalisations and then an accompanying number sequence

• Sometimes starting with a sequence of numerical results:

and asking for a generality to be expressed and proved algebraically as well as a result being derived from a diagram (as well as common sense reasoning).

Occasions to involve algebra throughout the maths curriculum as well as relating notation to scientific relationships and spreadsheet formulas can help to promote its usefulness.

• For angles, this might be recording a + b + c = 180o and creating and using algebraic statements to solve an angle problem, eg in a triangle the angles increase by a constant amount and one of the angles is 40o; what are the other two? For ‘vertically’ opposite angles, the statements a + b = 180o and a + c = 180o can lead to a deduction that b = c.

• In work on averages, this could involve proving that the median and the mean of four consecutive numbers are the same and are always the first number, add 1½.

• In work on area, this could involve viewing a trapezium as two triangles so a rule for finding the area of any trapezium is ½ ah + ½ bh.

• Finding pairs of numbers where the sum is equal to the product can involve fractions, which can be related to a representation as a(b – 1) = b (fixing various values of ‘b’ to find an associated value for ‘a’ and then checking these).

• Work on trial and improvement could involve a decimal search – maybe to find the largest rectangular area that can be enclosed by a 20 m long (thin) rope, which could be related to maximising the expression: w(10 – w) and drawing a graph.

Purposes for algebraic manipulation work can helpfully be set within the arena of mathematical (and general) problem solving, with a desire for completion possibly achieved by producing a general rule or a proof.

Algebraic statements can then be appreciated to be the most appropriate way of succinctly expressing relationships and/or general statements. Such a drive encompasses more than developing important algebraic manipulation skills; it can provide a context, a purpose and a motivation for algebraic activity, maybe banishing bafflement.